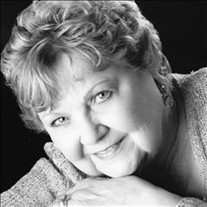 Lois Jean Phillips went to be with the Lord on January 6th, 2022. She left this earth with her loving children and grandchildren near her side. She leaves behind her children Ronald Joe and Becky Phillips and Katy and Randy Rominger, 4 siblings, many nieces and nephews and lifelong friends, her seven grandchildren, her 18 great grandchildren, and seven great-great grandchildren. Plus numerous spouses who quickly adopted her as their grandma and more children on the horizon!! She had great style and loved to shop and cook and travel in her motorhomes. She was there for anyone who needed her. She was loving, caring, steadfast, classy, genuine, trustworthy and always willing to listen. She was a wonderful cook, she was often sassy, she was incredibly generous, quick-witted, and honest. Lois Jean began life in Slick, Oklahoma June 23, 1931. She was the first born to Nolan and Priscilla (Pat) Cornelius. She had a sister and several brothers and helped run the family grocery and gas station before they all moved to the Central Valley of California in the mid forties, where two more siblings came along. She met and married McKinley Phillips as a teenager and quickly became a young mother. She took her baby on the road sometimes while Mac drove a truck and later she did accounting work as well. They were hard-working parents who also knew how to enjoy life. They made memories on their boat and helped host fun family reunions. She supported her son's business aspirations and seeing her daughter graduate from college was one of her proudest moments. In 1979 Lois and "Grandpa Mac" opened up the successful Phillips Sheet Metal business in Visalia. They continued working hard and were eventually able to sell the business to retire and travel. Niagara Falls was among her favorite trips. They enjoyed being snowbirds near their friends in Happy Trails Resort in Surprise, Arizona in Winter and being near friends and family in the Pacific North West in the summers. Mac passed in May of 2000. They had shared over 50 years of marriage and delighted in their Grandchildren and Great Grandchildren. But Lois wasn't done! There was more for her to do and see over the next 21 years. She married a nice man named Rudy for a short time. After he passed she sold her motorhome to a wonderful man named Don. It was a third marriage for both of them. Not many people get to experience such a great love in their 70s and 80s like Lois and Don. They had fun and adored each other and they never liked to be apart. They spent 10 years together in Washington and Happy Trails before he passed. They continued to enjoy their grandkids and together they welcomed many new great grandkids to the family. After he went to be with the Lord, Lois had three more years with her children and grandchildren. Grandma Lois always loved Jesus and listening to gospel music. At the end of her fight against cancer she looked forward to being with Jesus and the loved ones who went before her. In Surprise, Arizona, funeral will be held on Tuesday, January 11th, 10am-12pm at Surprise Funeral Care, 16063 W Bell Rd, 85374. Followed by a light lunch at the same location to share memories. In Visalia, California, viewing will be on 10am-12pm Thursday, January 13th at Salser & Dillard Funeral Chapel 127 E Caldwell Ave., Visalia. Funeral Service will be held 9am Friday, January 14th also at Salser & Dillard, with burial to follow 10:30am at Visalia District Cemetery, 1300 W. Goshen Ave. Instead of flowers, please make donations in honor of Lois to Samaritans Purse, Renewing Grace Together, or Salvation Army. Don't just pretend to love others. Really love them. Hate what is wrong. Hold tightly to what is good. Love each other with genuine affection, and take delight in honoring each other. Romans 12:9-10 Services have been entrusted to Salser & Dillard Funeral Chapel. Memorial Tributes and condolences may be offered by logging onto www.salseranddillard.com.

Lois Jean Phillips went to be with the Lord on January 6th, 2022. She left this earth with her loving children and grandchildren near her side. She leaves behind her children Ronald Joe and Becky Phillips and Katy and Randy Rominger, 4 siblings,... View Obituary & Service Information

The family of Lois Jean Phillips created this Life Tributes page to make it easy to share your memories.

Send flowers to the Phillips family.