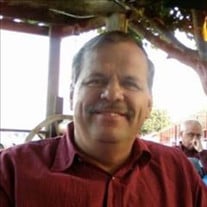 Leroy Eugene Clark Jr, 63 of Visalia, California, died on September 24, 2021, in Visalia, California. Leroy was born to Leroy Eugene Clark Sr. and Marie Jesucita Falcon on September 3, 1958 in Kansas City, Missouri. Leroy grew up in Kansas City until he moved to the Central Valley in 1970 where he graduated from Exeter Union High School. The only boy, with 7 sisters, Leroy was picked on by his sisters, always playing practical jokes at his expense, but if truth was told it was because they loved him so. He married Jennifer Lynn (Allen) on Saturday, November 23, 2002, in Clovis, Ca. Together they had two children, that changed his life. He was so filled with love for his kids, there was nothing in this world he wouldn't do for them. If nothing else in this world is true Leroy's love for the Kansas City Chiefs ran deep. Although he did have a bit of an obsession with collecting, in particular Hot Wheels and Funko POP's, filling an entire room, not to mention the garage and everywhere else he could find space, some would say he bordered on hoarding. He is survived by his spouse Jennifer Clark of Visalia, CA; five children, Derrick Clark, Danae Clark, Leroy Clark, III (Barbara), Laura Ann Clark (Robert), and Leeanne Clark (Chris); his mother, Marie Jesucita Falcon; six sisters, Sandra Sauceda (Rufus), Dorothy Brazeal, Susan Rodrigues (John), Barbara Weber (William), Cathy Cauthon (John), and Pamela Clark; and his Other, 2 Grandchildren. He is preceded in death by his father, Leroy Eugene Clark Sr. and one sister, Mary Clark. Leroy will truly be missed by all. Visitation will be held 3pm October 6th, 2021 at Salser & Dillard Funeral Chapel, 127 E. Caldwell Ave., Visalia with a Catholic Funeral service to follow at 4pm. Services have been entrusted to Salser & Dillard Funeral Chapel. Memorial Tributes and condolences may be offered by logging onto www.salseranddillard.com.

The family of Leroy Eugene Clark, Jr created this Life Tributes page to make it easy to share your memories.

Send flowers to the Clark family.