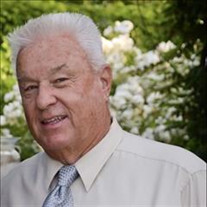 Larry Jones was welcomed into the arms of Jesus on January 22, 2022 at age 78 after a courageous battle with cancer. Larry was born in Fresno on June 12, 1943 to Buck and Marie Jones. One of four children, he grew up in the Fresno area, graduating from Roosevelt High school in 1961, and marrying his high school sweetheart, Donna Briggs in 1965. They were blessed with two sons and a daughter and had the time of their lives raising them. They owned a small ranch in Clovis for many years where Larry loved tending to the almond trees and the animals, along with his career in commercial refrigeration. Larry moved his family to Northern California for a time and was co-owner of Capital Refrigeration in Sacramento. His beloved wife of 30 years passed away in 1995 and he was blessed to later marry Maribea Johs, adding two more children to the family. They were blessed with many wonderful adventures and happily married to the day he died. After Larry retired they moved to Texas where they settled in Wimberley. He loved being a Texan and loved his Longhorns, always sporting their gear and rooting them on. He was an animal lover and enjoyed watching and feeding the deer off his deck everyday and fishing as often as time would allow. Never one to sit still, he took a job driving a school bus in Wimberley and was adored by all the children who referred to him as Mr. Larry each day as they chatted with him to and from school. Larry and Maribea moved back to the Visalia area in 2017 to be near family and he spent his last years spoiling grandchildren and welcoming great grandchildren. Larry never missed an opportunity to show up for others. He always had a way of making everyone feel like the most important person in the room. He was a legendary listener, always thinking of others above himself and loved to hear what was important to you. Always looking to the future, Larry built two homes from the ground up and remodeled countless others. He loved to spend time in the garage, restoring his '57 Chevy or working on a new project. He was always up for a good adventure and went parasailing and white water rafting several times in his late 50's. He loved to travel and see new things and took some amazing trips in his lifetime, making lots of memories. He had a mean sweet tooth and never met a cookie he didn't like. It was one of the things the grandkids always found amusing and often loved to bake for their Papa. Ever the optimist, Larry never let things get him down and was the best example of keeping a good attitude and hoping for the best in life. He leaves behind a loving wife, Maribea Jones, a sister, Diana Wyman, several nieces and nephews, his beloved children: Greg Jones (Margarita), Laurie Jones-McCoy (Gregg), Jerry Jones (Tanya), Steven Johs (Belinda) and Cynthia Jacques. He loved his grandchildren and was the best Papa ever to: Brittney Lopez (Adrian), Jared McCoy (Adrianna), Cade McCoy, Isabella McCoy, Zoe McCoy, Dakota Jones, Kaitlyn Takanishi (Daniel), Courtney Jones, Austin Jones, Connor Marshall, EJ Jacques, Michael Johs and Nickolas Miller (Crystal). He was blessed with five great grandchildren: Emery Lopez, Micah Takanishi, Olivia Miller, Ethan Miller and Colton Marshall. He will be missed greatly by those who knew and loved him and we hope to follow his example to show up for others, live fearlessly, leave everyone better than you found them, enjoy life and live big! Arrangements have been entrusted to Salser and Dillard Funeral Chapel. Memorial tributes and condolences may be offered by logging onto www.salseranddillard.com

Larry Jones was welcomed into the arms of Jesus on January 22, 2022 at age 78 after a courageous battle with cancer. Larry was born in Fresno on June 12, 1943 to Buck and Marie Jones. One of four children, he grew up in the Fresno area, graduating... View Obituary & Service Information

The family of Larry James Jones created this Life Tributes page to make it easy to share your memories.

Larry Jones was welcomed into the arms of Jesus on January 22,...

Send flowers to the Jones family.