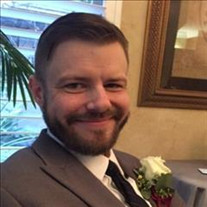 Kurt Jared Kross, was born on April 2nd, 1981, and was a long time resident of Visalia and Tulare. He passed away at age 40 on November 24, 2021 in Visalia. Kurt attended Garden Elementary, Cherry Avenue Jr. High and Tulare Union HS. After high school he went to Fresno State but transferred to Cal State Bakersfield where in 2009 he received a bachelors of science degree in Business Administration - Accounting concentration. In Jr High and HS he played trumpet in the band. His band experience enabled him to travel to many places including Hawaii and the Pasadena Rose Bowl Parade. Kurt appreciated all types of music and loved playing his guitar. He had a quick wit and an incredible, sharp sense of humor. At his core he was kind and gentle, loved his family and never stopped fighting despite the many adversities life threw at him. Kurt always had a soft spot for animals, enjoyed all of the dogs and cats in the family while growing up, and, especially loved his dog Zeus, who he had for many. He was a huge fan of WWF wresting and had a photographic memory for all things 80's and 90's sitcom trivia. There was no question regarding characters or show themes that he could not answer. While growing up in Tulare, Kurt played soccer and little league baseball (which he liked the best). One of his favorite things to do was attend baseball card shows with his brother and sister, Kyle and Kari. He was able to meet Willie Mays, Frank Thomast Ryan Klesko and several other major league players. Kurt lived in San Diego for a few years where Kyle also lived. They enjoyed hanging out together and going to Padres and Charger games. While working at Macy's in Visalia Kurt met his future wife Melissa Estrada, asked her out for coffee, and about a year later they were married on December 31, 2016. Kurt adored Melissa and was so happy that he had found his soul mate. Kurt had a dream of some day opening a card shop of his own, using many of his cards and comics to help make that happen. Recently Kurt worked part time at a local card shop gaining valuable knowledge and impressing the staff with what he knew about many of the players and his ability to recognize upcoming stars. He also liked dabbling in the stock market like his Grandpa Doyle. It was fun and challenging for him and he made many right decisions, like recognizing the Beyond Meat trend before most even knew what it was. Kurt liked helping his dad with many home improvement projects. He was a fast learner and a hard worker. He was very close to his mom too and they enjoyed talking about topics ranging from finance, investing, food, tv shows, movies, collecting and day to day events. Kurt is survived by his wife Melissa Estrada, father and mother, Ken and Sandy Kross, sister and brother-in-law Kari and Ryan Hogg, brother and sister-in-law Kyle and Kristine Kross, nephews Nick Hogg, Nate Hogg, Cameron Kross, Noah Hogg and Caleb Kross and niece Cassidy Kross. Viewing & Prayer Service will be held 10 AM - 11 AM Tuesday, December 7th, 2021 at Salser & Dillard Funeral Chapel, 127 E. Caldwell Ave., Visalia. Graveside services will be held 12 PM - 1 PM Tuesday, December 7th, 2021 at Visalia District Cemetery, 1300 W Goshen Ave, Visalia. Services have been entrusted to Salser & Dillard Funeral Chapel. Memorial Tributes and condolences may be offered by logging onto www.salseranddillard.com.

Kurt Jared Kross, was born on April 2nd, 1981, and was a long time resident of Visalia and Tulare. He passed away at age 40 on November 24, 2021 in Visalia. Kurt attended Garden Elementary, Cherry Avenue Jr. High and Tulare Union HS. After high... View Obituary & Service Information

The family of Kurt Jared Kross created this Life Tributes page to make it easy to share your memories.

Send flowers to the Kross family.