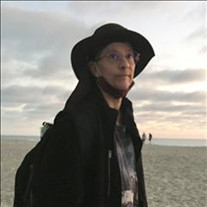 Kevin was born on August 17, 1971, two months premature to Glenn and Laura Couch. Weighing just three and a half pounds, Kevin spent the first month of his life at Valley Children's Hospital. This wouldn't be the only challenge Kevin would face in life. Kevin grew up with his parents and sister in Visalia, California, attending Washington Elementary School, Valley Oak Middle School, Golden West High School and College of the Sequoias. Throughout his life, Kevin loved to play Dungeons & Dragons with his friends, friends that would be a family to him for the rest of his life. Although his address was in Visalia, in the summers and most weekends of his youth, you would only be able to find him at his grandparents home in the countryside of Orosi, California...swimming, roaming the olive orchards, climbing the foothills and walking the banks of the Friant Canal. Kevin was very close to his grandpa, many times he would go to work with his grandpa. While grandpa worked at the Orlopp Ranch as a mechanic, Kevin would climb around the giant tractors, tease the turkeys in their cages and wander the orange tree orchards. Losing his grandpa to leukemia in 198(?) was extremely hard for Kevin. Being born premature, school wasn't always easy for Kevin. Although he was clever and bright, conventional schooling was a challenge for the small kid with dyslexia. But he would succeed and graduate from high school in 1991. In 1996, Kevin and his friends decided Washington state was the land of opportunity, a place to find their calling and a place to make a fresh start. Kevin and his friends lived in Kirkland, Washington for seven years, sharing a two-story house to cut costs. They would later move into another two-story home in Seattle where they would spend the next 20 years, many of them carving their way into the world of technology that Seattle is so well known for. Kevin spent the last 23 years as a Quality Assurance Engineer in the IT department at Nordstrom, proving that small kid with dyslexia from Visalia was meant for success! In 2017 Kevin was diagnosed with stage four colon cancer. In August 2020 Kevin came back to Visalia to live with his family for the remainder of his life. Kevin was a fighter, a warrior against his cancer; he fought hard. On April 17, 2021, Kevin passed away from his life here on earth...not defeated, but winning to the next level. Kevin was preceded in death by his father, Glenn. He is survived by his mother, Laura; sister Tessa and brother-in-law Jeff; nephew, Carson; niece Lauren; and aunts and cousins. Memorial services will be held 4:00 PM Saturday, April 24th, 2021 at Salser & Dillard Funeral Chapel, 127 E. Caldwell Ave., Visalia. Services have been entrusted to Salser & Dillard Funeral Chapel. Memorial Tributes and condolences may be offered by logging onto www.salseranddillard.com.

Kevin was born on August 17, 1971, two months premature to Glenn and Laura Couch. Weighing just three and a half pounds, Kevin spent the first month of his life at Valley Children's Hospital. This wouldn't be the only challenge Kevin would... View Obituary & Service Information

The family of Kevin Branden Couch created this Life Tributes page to make it easy to share your memories.

Send flowers to the Couch family.