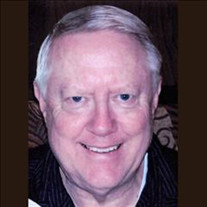 Kermit L. Norton died March 28, 2021 at his home after a brief illness. Kermit was born in Fort Scott, Kansas on May 19, 1935. He was preceded by his parents, Ira and Lucille Norton, a brother Philip Norton, and daughter Cindy Norton. He is survived by his wife Betty (Lockamy) of 58 years, sons Kevin of Visalia, David (Jill) of Alta, sister-in-law Joy Norton and nephew Eric Norton of Honduras, his cousin Elizabeth Sodersten (Gene), and niece Jill Wheaton of Visalia. Dr. Scott Murray and Dr. Chris Audino both of Visalia and Dr. Bob Parker of Merced, his college roommate from dental school, were among his very special friends. After graduating from high school in Iola, Kansas, Kermit attended the College of the Sequoias and California State University, Fresno, earning a bachelor's degree in Zoology. He pursued graduate studies at the University of Maryland School of Dentistry in Baltimore, Maryland. Following graduation, Kermit was commissioned First Lieutenant with the United States Army at Fort Polk, Louisiana. Kermit and Betty were married on December 1, 1962, at Betty's childhood church in Jacksonville, North Carolina. Upon discharge from the Army, Kermit and Betty settled in Visalia, CA, where he established his dental practice that spanned over 51 years. Kermit was a hard-working, dedicated professional whose chief concern was providing quality care and education to his patients. He was an avid UNC Tarheel fan. He watched all of their games on TV, and was a huge fan of coach, Dean Smith. One highlight of many visits to North Carolina was visiting the Dean Dome at UNC in Chapel Hill! He enjoyed being the perfect tour guide to Betty's 'North Carolina siblings' when they visited Visalia, and was eager to point out growth and changes that had occurred over the years. Kermit's abundance of dry wit and humor was a part of his personality enjoyed by others. He will be greatly missed. Burial will be held at Visalia District Cemetery on Friday, April 2, 2021 at 9:00 AM followed by a celebration of life service at 2:00 PM at Salser & Dillard Funeral Home, 127 East Caldwell Avenue, Visalia. In lieu of flowers, donations may be made to Kaweah Delta Hospice of Visalia.

Kermit L. Norton died March 28, 2021 at his home after a brief illness. Kermit was born in Fort Scott, Kansas on May 19, 1935. He was preceded by his parents, Ira and Lucille Norton, a brother Philip Norton, and daughter Cindy Norton. He is... View Obituary & Service Information

The family of Kermit Lee Norton created this Life Tributes page to make it easy to share your memories.

Send flowers to the Norton family.