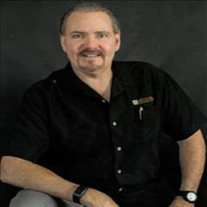 Kelly M. Mitchell passed away suddenly Wednesday, June 16, 2021 at the age of 64 in Visalia, CA. He was one that never knew a stranger, always willing to lend a helping hand or share his knowledge. Kelly was larger than life with a heart of gold and will be deeply missed by family, friends, and colleagues. Kelly was born to Clair and Viola Mitchell in Brawley, CA on August 14, 1956. Brawley, situated in the Imperial Valley, was where Kelly was raised and attended local schools. During his formative years, Kelly shared a special bond with his father, who shared his love of the outdoors, teaching Kelly to hunt, fish and ride UTVs. Kelly was known for having a sense of humor, being a prankster and shared a strong camaraderie with his friends. You could find Kelly tooling around in his prized Ford Bronco, spending summer vacations with his family at June Lake, fishing, enjoying the mountains or in La Jolla, surfing and being a beach bum. One summer, while in June Lake, he worked in a bicycle shop which spiked an interest in cycling. Kelly attended Brawley Union High School where he enjoyed tennis and participated on the football team. Upon graduating from high school, Kelly attended California Polytechnic State University, San Luis Obispo graduating with a Bachelor of Science Degree in Agricultural Management. Kelly entered the agricultural business as a PCA from 1980 to 2003 in the central San Joaquin Valley. During that time, he worked in several wholesale and retail positions in the chemical industry. In 2003, following in his father's footsteps, Kelly entered the insurance industry. He opened Mitchell Insurance Services in Visalia, CA which continues to operate today and will continue to run with the same standards, commitment, and passion that Kelly would still hold. In April 1986 Kelly married Kathleen Ribeiro. They have a son, Matthew, who was born in 1988. They were divorced in 1992. Kelly was really involved in Matt's hobbies, including dirt biking and skateboarding. Matt ended up becoming a certified licensed insurance agent for the agency, working alongside Kelly until his passing. Kelly loved good food, good wine, and a social gathering. He also loved his work, his devoted staff and loved helping his customers protect their investments. Whether it is the desert, the beach, or the mountains, Kelly would find joy and relaxation in socializing with his friends. He enjoyed riding bikes in Ventura, camping and riding in his CanAm at the beach and the desert. He also was a gun enthusiast and enjoyed target shooting. Giving back to the community, or supporting local leadership was important to Kelly as he always wanted to make a difference. He supported several causes, was active in the Tulare County Farm Bureau, Friends of Oceano Dunes and supported political interests, local, state, and national. Kelly loved his country and the Constitution that supports it. He was preceded in death by his parents Clair and Viola Mitchell. Kelly is survived by his son, Matthew K. Mitchell & Sheila Turner (Daughter in Law), sister Candace Flammang (Dennis), niece DeeAnn McKelvie (Scott), nephew Chris Flamming (Julie), great-nieces and nephews, Ross McKelvie, John McKelvie, Lindsey McKelvie, Hannah Wong (Jeff), Grant Flammang, companion Tamara Galli and his beloved French Bulldogs, "Stella" and "Zoey. A celebration of life will be held Monday, June 28, 2021, at 11:00 am, at the International Agri-Center-Heritage Complex, 4500 S. Laspina St., Tulare, CA. Funeral arrangements are being handled by Salser and Dillard Mortuary Chapel, 127 E Caldwell Ave., Visalia, CA. In lieu of flowers, memorial contributions may be made in Kelly's name to Friends of Oceano Dunes by visiting www.oceanodunes.org.

Kelly M. Mitchell passed away suddenly Wednesday, June 16, 2021 at the age of 64 in Visalia, CA. He was one that never knew a stranger, always willing to lend a helping hand or share his knowledge. Kelly was larger than life with a heart of... View Obituary & Service Information

The family of Kelly Michael Mitchell created this Life Tributes page to make it easy to share your memories.

Send flowers to the Mitchell family.