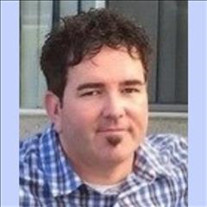 Justin Robert Mathew Hughes passed away on June 20, 2021 in the comfort of his home surrounded by his loved ones. Justin was born on January30, 1976 to Rodney and Patsy Hughes. He was raised in Farmersville, CA and graduated from Exeter Union High School in 1994. Shortly after high school Justin met the love of his life, his wife, Marilyn. Justin and Marilyn have a beautiful family: 2 sons, Justin Jr. and Hayden, and 2 daughters, Charisma and Devlin. Justin loved his family more than anything and they were the joy of his life. If you knew Justin, you knew how much of a Mama's boy he was. His mother, Patsy was the light of his life. Whether it was sitting on the couch or in the restroom, Justin was right by her side. He loved his mama so very much. They will always share a very special bond. No love is greater than that of a father for his son. Justin's father will always remember the day Justin was born. Rodney couldn't believe how big of a boy he was. There are so many things Rodney taught Justin, but the most important one was how to be such a loving father. Justin shared his love of football with his family. We all know what a diehard Raiders fan he was. He enjoyed working on his truck and motorcycle, and of course the sound system. Justin's happy place was spending all his time with his family at the beach. He loved sitting on the pier listening to the waves. Justin's passion was his family. Not a day went by that he didn't think of his children and their futures. Justin would do anything for his wife and children. His goal in life was to make sure his children had a good future. He wanted to make sure they did not have to work as hard as he did. Justin loved his wife and children with all his heart. Justin fought so hard the last six months for his family. Justin was a hard worker, working most of his adult life. He was employed with Frito Lay in Visalia as a Route Sales Representative. Justin considered Frito Lay his second family. Justin grew up in Farmersville with his two brothers, Ronnie and Christopher. They boys were well known in the neighborhood, always playing outside and causing mischief. Justin in survived by his parents, Rodney and Patsy Hughes, wife Marilyn Hughes, 4 children, Justin Jr., Charisma, Hayden, and Devlin, brothers, Ronnie and Christopher Hughes, and sister Tootsie Rogers. A viewing will be held on Tuesday, July 6th, 2021 from 4PM-7PM at Salser & Dillard Funeral Chapel, 127 E. Caldwell Ave., Visalia, CA 93277. A Funeral service will be held on Wednesday, July 7th, 2021 at 8AM at Salser & Dillard Funeral Chapel, following a Graveside service at Visalia District Cemetery at 10AM.

Justin Robert Mathew Hughes passed away on June 20, 2021 in the comfort of his home surrounded by his loved ones. Justin was born on January30, 1976 to Rodney and Patsy Hughes. He was raised in Farmersville, CA and graduated from Exeter... View Obituary & Service Information

The family of Justin Robert Mathew Hughes created this Life Tributes page to make it easy to share your memories.

Send flowers to the Hughes family.