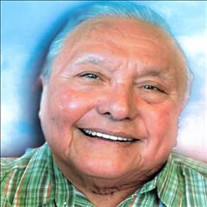 It is with deep sorrow and heavy hearts that we announce that Julio D. Luna, of Visalia, passed away surrounded by his wife and children at the age of 83. A fighter to the very end he took his last breath at 11:55pm on January 12, 2022 in his home, after a brief but difficult battle with Cancer. Although it saddens our hearts, it is a blessing to know he is no longer in pain and in a better place in the Lord's Hands. Julio was born February 25, 1938 in Dinamita, Durango, Mexico to his parents Gregoria "Leta" Saldivar and Julio Soto. Julio moved with his family to the Central Valley, until finally residing in Dinuba and the surrounding areas. Growing up he was raised with his with his 2 older siblings Juan and Tonia Saldivar and his 2 younger siblings Mary and Rosie Luna. After graduating from the R.O.T.C. Program at Dinuba High School, Julio joined the Armed Forces, deciding on the United States Navy. During his time with the U.S. Navy he deployed and proudly served as a Radioman aboard the USS Nichols, a Navy Destroyer Escort. After serving with the Navy he returned home to Sultana to lay down roots of his own and start a career. Once back in Sultana, he started working at a local supermarket owned by a man named Johnnie O'Loan. Johnnie would eventually became a real "father figure" and mentor in Julio's life. Johnnie taught him the ins and outs of meat cutting and Julio took to it. Julio enjoyed it so much he became a career meat cutter for over 36 years before finally retiring with Safeway Supermarkets, which he was very proud of. During his life, Julio fathered 6 beautiful children, 4 daughters and 2 sons. When he wasn't providing for his family he enjoyed spending time with close friends, family and especially the younger generation. He enjoyed entertaining with family over a few drinks and telling us the stories of his life, which we relished. If he wasn't busy telling us stories he was busy making up "Nicknames" for each and every family members which he thoroughly enjoyed. When he wasn't home you were sure to find him doing one of his two favorite things, 4 wheel driving in his Toyota or camping somewhere along the California Coastline with his wife every chance he got. Julio is survived in death by his wife of 32 years Mary Luna, his daughters Cindy Luna (Visalia), Theresa Valero (Visalia), Julie Renteria (Visalia) and Denise Luna (Dinuba). He is also survived by his sons Steve Aceves (Fresno), and Mike Luna (Visalia). Additionally he is survived by his children Sylvia Gonzales (Tenessee), Fabian Lopez (Ivanhoe), Doenitz Lopez (Visalia), 29 grandchildren, 37 great grandchildren, 3 great-great grandchildren. Our beloved Husband, Father and Grandfather's legacy will endure and live on in the hearts of everyone he has touched. His enduring strength, perseverance, work ethic, vigor for life and love for family will set an example for our future generations to live up to. Our Family Patriarch has set the family foundation and can now sit back, relax and enjoy what he has created through his blood, sweat and tears. You will be missed by all and forgotten by none. Although we will mourn your loss daily, we will patiently wait and will rejoice the day we are once again reunited. We miss and love you always. Viewing will be held 12 PM - 2 PM Saturday, February 5th, 2022 at Salser & Dillard Funeral Chapel,127 E. Caldwell Ave., Visalia. Prayer Service will be held 1 PM - 2 PM Saturday, February 5th, 2022 at Salser & Dillard Funeral Chapel. Services have been entrusted to Salser & Dillard Funeral Chapel. Memorial Tributes and condolences may be offered by logging onto www.salseranddillard.com.

It is with deep sorrow and heavy hearts that we announce that Julio D. Luna, of Visalia, passed away surrounded by his wife and children at the age of 83. A fighter to the very end he took his last breath at 11:55pm on January 12, 2022 in his... View Obituary & Service Information

The family of Julio Dearo Luna created this Life Tributes page to make it easy to share your memories.

It is with deep sorrow and heavy hearts that we announce that...

Send flowers to the Luna family.