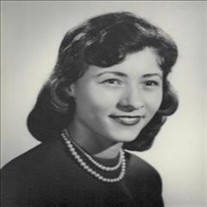 Judith "Judy" Ann Metcalf was born on August 15, 1941 in Douglas, AZ to Joseph and Gladys Samaniego and grew up in Tucson, AZ with her 3 siblings: Jerry, Buddy, and Peggy keeping each other in and out of mischief. She was married to Russell Egbert from 1962 - 1969 in Los Angeles, CA. She was instrumental in helping her husband achieve his Doctorate degree. They had two children: a daughter named Angela and a son named Russell. Judy lived in Fullerton, CA, with her children until she married John Metcalf in 1973. They bought a house and moved across the street to Placentia, CA where they lived for 29 years. John and Judy moved to Visalia, CA in 2002 and John passed shortly after their move. For many years she worked in the telecommunications field for PacBell in various capacities. She also was a lobbyist for Communication Workers of America always fighting for the rights of her co-workers, whether she knew them or not. She pursued a lifetime path of learning and education. She earned her earned her Bachelor's degree in Sociology from the University of San Francisco. Her hobbies were many including square dancing, fishing, tole painting, golfing, raising chickens, and writing poetry and short stories. She published her works in magazines as well as authoring her own children's book called The Donkey and the Watermelon, a loosely based experience from her childhood. One of her greatest passions was not only making jewelry but wearing jewelry. Judy was full of life and laughter. She could and would talk to anyone and loved to make people laugh. After retirement she became a professional clown named Clutzy. But, her greatest joy was her family. She is survived by her twin brother Jerry, a younger sister Peggy, a daughter Angela, a son Russell, nine grandchildren, and 13 great grandchildren. Those who knew her will miss her radiating smile and positivity. She passed away peacefully to be with our Lord and reunited with family on February 5, 2022. Celebration Of Life services will be held 11:00 AM - 12:30 PM Saturday, February 26th, 2022 at Church of Jesus Christ of Latter Day Saints, 650 N. Lover's Lane, Visalia. Graveside services will be held privately. Services have been entrusted to Salser & Dillard Funeral Chapel. Memorial Tributes and condolences may be offered by logging onto www.salseranddillard.com.

Judith "Judy" Ann Metcalf was born on August 15, 1941 in Douglas, AZ to Joseph and Gladys Samaniego and grew up in Tucson, AZ with her 3 siblings: Jerry, Buddy, and Peggy keeping each other in and out of mischief. She was married to Russell... View Obituary & Service Information

The family of Judith Ann Metcalf created this Life Tributes page to make it easy to share your memories.

Send flowers to the Metcalf family.