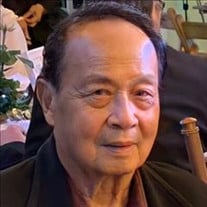 Juan "Johnnie" Acena Amano was called peacefully to our Lord on Tuesday, August 31st 2021 at the age of 87. He was born on June 12, 1934 in Nagsangalan, Vigan, Ilocos Sur Philippines to Maria Concepcion Acena and Maximo Amano, and is the youngest of two. Juan graduated from Vigan Trade school in 1951 where he learned the art of carpentry. He then married his wife Elena Llamas on May 12, 1957 and went on to have 7 children. During his young adulthood, he worked in construction and carpentry overseas in Guam and Saudi Arabia in order to provide for his growing family. He eventually settled back in his home country in January of 1966 in the province of Tabuk, Kalinga, where he opened his own furniture shop business. By 1994, Juan and his wife were able to migrate to the states with help from their fourth child. They lived the American dream, working as farm laborers until retirement. In 2001, Juan diligently worked for his citizenship, and legally changed his name from Juan to Johnnie. Despite being retired, Johnnie spent most of his days working at home in his vegetable garden, utilizing his carpentry skills on various at-home projects, and staying busy caring for his grandchildren. He enjoyed biking, since it was his main form of transportation, playing cards with relatives, and pressing his luck at the casino. He was a kind soul who enjoyed life, but his time was best spent with his ever-growing family. In March of 2021, Johnnie was diagnosed with stage four prostate cancer. While the doctors predicted his time here on earth wouldn't go past a couple of months, he was blessed with 5 months of precious family time. He is survived by his wife Elena, his brother Marcos, his 7 children, 16 grandchildren and 11 great grandchildren. His kind heart and infectious smile will be remembered by friends and family members near and far.

Juan "Johnnie" Acena Amano was called peacefully to our Lord on Tuesday, August 31st 2021 at the age of 87. He was born on June 12, 1934 in Nagsangalan, Vigan, Ilocos Sur Philippines to Maria Concepcion Acena and Maximo Amano, and is the youngest... View Obituary & Service Information

The family of Juan Acena Amano created this Life Tributes page to make it easy to share your memories.

Juan &quot;Johnnie&quot; Acena Amano was called peacefully to our Lord...

Send flowers to the Amano family.