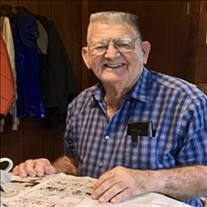 Joseph August Mead passed away peacefully on October 13, 2021 in Visalia, CA at the age of 86. He is survived by his wife of 64 � years, Pat; his children Laurie Thatcher, Danna Mead, Kim Vaccaro (Chris), and Randy Mead, 11 grand children and 9 great grandchildren; his sister Elise Blunt of Visalia and brother Glen Mead of San Antonio, TX. Born in Casper, WY on March 23, 1935 to Roy and Evelyn Mead where he lived until he was 6. The growing family then moved to Arkansas where his father worked on the railroad. When Joe was in 3rd grade the family made their way to California, ultimately arriving in Visalia. He attended Elbow School, E. Union School, and spent a year at Visalia Union High School (now Redwood H.S.) then finished and graduated from Visalia Sr. High (now Mt. Whitney H.S.). He joined the National Guard in 1953 and served honorably for six years, including assisting in the 1955 Visalia flood. He attended College of the Sequoias where he met Patricia Hedrick, who would become his wife. They were introduced by their respective best friends, J.L. and Viola, at the COS Giant Jamboree in September of 1955 and were married on April 18, 1957. In 1956 he began work at the Gas Company, where he served as a union representative as well as helping for many years with the annual company picnic- always a family highlight. He enjoyed his work at the Gas Co. and the many friends he made there, but his real love was farming. In 1971 the family moved to a ranch on the outskirts of Visalia where he raised grapes, walnuts and plums. He loved the land. Every morning he drank his coffee while overlooking the neighbor's fields with Venice Hill in the distance. He was the kindest, gentlest, most generous man that some of us were lucky enough to know. He taught by example; work hard, do a good job, help your neighbor, be kind to people. He demonstrated these qualities on a daily basis. He seemed happiest when he was working on a project and even more so if it was to help someone else. Numerous people and places have benefitted from his skilled hands and sharp mind. If you were a friend or neighbor in need of help, he was there. He was a quiet man but would greet everyone, family, friend or stranger, with a warm welcome. He was affectionately known as "Joker" by many. Above all else, he was a devoted father, grandfather and husband, caring for his beloved wife, Pat, until his last day. He brought her coffee every morning and held hands when they were out in the world. They shared a love of their family, their friends, their animals, the ranch and a profound love for each other. He was deeply loved and will be in our hearts forever. A Celebration of his life will be held Friday, October 22, 2021 at 3:00 p.m. at Faubel's Dragon's Lair, 20130 Ave 336, Woodlake, CA. Services have been entrusted to Salser & Dillard Funeral Chapel. Memorial Tributes and condolences may be offered by logging onto www.salseranddillard.com.

Joseph August Mead passed away peacefully on October 13, 2021 in Visalia, CA at the age of 86. He is survived by his wife of 64 &#65533; years, Pat; his children Laurie Thatcher, Danna Mead, Kim Vaccaro (Chris), and Randy Mead, 11 grand children... View Obituary & Service Information

The family of Joseph August Mead created this Life Tributes page to make it easy to share your memories.

Send flowers to the Mead family.