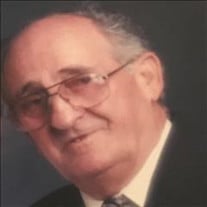 Joseph Consolino Coppola 1928-2022 On March 1st, 2022, Heaven gained a loving husband, father, grandfather, great grandfather, and uncle. Joe died peacefully in his sleep surrounded by family. Joseph Consolino Coppola was born in Boston, Ma on December 16th, 1928, to Italian immigrants Pasquale and Mary Coppola. He was the sixth of eight children. Joseph attended East Boston High School and received his high school diploma while serving in the United States Air Force. While stationed in Washington, D.C., he was assigned the position of base chauffeur, where driving the Brass around was the order of the day. In his words, "Better than being stuck in the kitchen!" Little did he know he would be assigned to one of the highest-ranking officers and the jeep provided would be a manual transmission, which he had NO experience! The officer actually asked Joe if he would like to trade places, but Joe managed to succeed in driving the clutch! Joe never backed down from a challenge! In Boston, 1951, while hanging out with his buddies at the local corner drugstore, Joe met the love of his life, Eileen Marie Sheehan. Eileen was waiting for the train at a nearby stop when Joe walked up to her, turning on all the charm and humor that we all know and will remember. The rest is history! Joe and Eileen married that same year, December 7th, 1951, spending the next 70 years together. Soon after, Joe and Eileen would welcome their first daughter, Rosemarie, followed by daughter Diane a few years later. Revere, Massachusetts, is where this young family would call home for the next six years. Joe supported his family by pressing pants in a dry cleaners and working construction jobs on the side. In 1960, Joe moved his family to Visalia, California, where son, Joseph, was born; reuniting with the majority of the extended Coppola family who had left Boston years before. Joe worked hard in construction and received his contractor's license. He worked in the building industry while saving money to open his first dry cleaners. His hard work paid off and Joe was able to purchase the One Hour Martinizing franchise. By 1965, Joe devoted himself to both careers as he and Eileen welcomed their fourth child, Janine. Joe's family will forever miss his humor, quick wit, that gleam in his eyes letting you know that he was up to something, and how you just might be the unfortunate recipient of the punchline of his joke. What has been mentioned many times by family and friends since his passing is how strange it is not seeing him in his recliner where he spent many years holding and rocking his grand kids. Joe was preceded in death by his parents, Pasquale and Mary, brothers, Tony, Ralph, and Gino, sisters, Mary, Gloria and Lena daughter Rosemarie, and great grandson, Joey. Joe is survived by his loving wife of seventy years, Eileen, daughter Diane (Steve), son Joseph, and daughter Janine (Mark). Grandchildren: Joseph, Jessica (Brian), Josselyn (Chris), Casey, Grant (Tiffany), Kelly, Dana, Toni (Andy), and Jack, along with 12 great grandkids with one on the way. He is also survived by his sister, Theresa Sciacca, and many, many nephews and nieces. Visitation will be held 9-10am Saturday, March 19th, 2022 at Salser & Dillard Funeral Chapel, 127 E. Caldwell Ave., Visalia, with a Celebration Of Life service to begin at 10am and burial to immediately follow at Visalia District Cemetery, 1300 W Goshen Ave, Visalia. Services have been entrusted to Salser & Dillard Funeral Chapel. Memorial Tributes and condolences may be offered by logging onto www.salseranddillard.com.

The family of Joseph Consolino Coppola created this Life Tributes page to make it easy to share your memories.

Send flowers to the Coppola family.