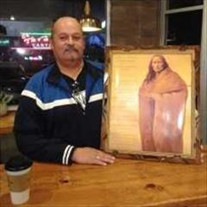 Johnny Guesa, 57 of Hanford, California, died on August 31, 2021, in Hanford, California. Johnny was born to Jose Guesa and Francisca Hernandes on June 24, 1964 in Fresno, California. Johnny grew up in Dinuba, CA and graduated from Dinuba High School. He was very active in sports, participating in boxing and loved playing football, a proud #73. He was always a hard worker, starting in construction when he was young, a bus driver in Hanford, then went on to get his education as a corrections officer and later worked in private security for over 14 years. Johnny love of football made him an avid Cowboys fan, always in his 73 jersey, proudly participating and winning with his fantasy football teams. More than anything he enjoyed spending time with his family and friends, never missing an opportunity to find out what they were up to and being part of the action. It was always important to him that everyone he knew was healthy, happy and always had what they needed. He is survived by two children, Alex Guesa and Guadalupe Herrera (Adam Cortez) of Reedley, CA; five grandchildren, Andrea Herrera, RJ Martinez, JJ Martinez, Olivia Martinez, and Michael Cortez; one sibling, 5 Siblings; and his niece, Francine Herrera, nephew Eric Herrera, nephew Aaron Herrera, niece Crystal Herrera, niece Veronica Martinez, nephew Gilbert Vallez, and nephew Gabrie Vallez. Johnny will truly be missed by all. Memorial services will be held 10:00 AM Saturday, September 25th, 2021 at Salser & Dillard Funeral Chapel, 127 E. Caldwell Ave., Visalia. Services have been entrusted to Salser & Dillard Funeral Chapel. Memorial Tributes and condolences may be offered by logging onto www.salseranddillard.com.

The family of Johnny Guesa created this Life Tributes page to make it easy to share your memories.

Send flowers to the Guesa family.