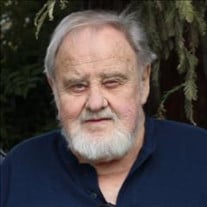 John J. Miller passed away with his beloved wife and sons at his side on Wednesday, September 22, 2021 after a short fierce battle with acute myeloid leukemia. He was a long time resident of Visalia, California. John was born February 2, 1937 in Emerson, Nebraska and grew up in Mitchell and Rapid City, South Dakota. He graduated from high school in Rapid City and attended Chadron State College in Nebraska. After college, he taught elementary school in a one room school house in Gregory, South Dakota before following his mother, Mary Heitzman Sivila, to Porterville, CA. When he reached California, John embarked on a long career as a psychiatric nurse and worked in Sonoma, Napa, and Porterville State Hospitals as well as Yuma Regional Medical Center. John was a renaissance man and indulged in a lifelong love of learning and deep study of history, philosophy, anthropology, religions of the world, and astronomy. He was also a master chess player and cast one of a kind chess sets forged in metal and beautifully hand painted. Somehow, John found time to embark on a second career as an antique dealer and was a part owner in Forgotten Treasures Antiques in Three Rivers and Lemon Cove, CA until his final retirement in 2004. His expertise was furniture and toy soldier restoration and appraisal. John had many hobbies and interests throughout his life; whether it was the outdoors, music, cars and motorcycles, trains, writing stories, casting toy soldiers and custom chess sets, or collecting. He was a kid at heart and approached everything he did with a youthful enthusiasm and excitement. Everyone who met John found him to be intelligent, humble, interesting, and warm. He never met anyone whom he wasn't able to strike up a meaningful conversation with and once it was over, he counted himself richer for the experience. Every conversation with him was a gift and an opportunity to gain insight, knowledge, and wisdom. All who knew him were lucky to call him friend and enjoyed the generosity of his spirit. He will be deeply missed. John is survived by his beloved partner in life, adventure, and carefully crafted nutbaggery - his wife of over 40 years, Annee Ferranti of Visalia, CA. The family joke was that John and Annee met in a mental institution - and indeed they did when they both worked at Napa State Hospital. It was the start of an unshakable friendship and later, encompassing endless love that neither ever took for granted and will endure for eternity. John is also survived by his sons David Miller of West Hollywood, CA and John Miller of Vacaville, CA. He was blessed with 9 grandchildren (Esteban Ortiz, Juan Miller, Marisol Miller, Rheanna Miller, Summer Miller, Laney Miller, Jeremy Miller, Ashley Plata, and Shane Sanchez) and 4 great-grand children. John was preceded in death by his mother, Mary Heitzman Sivila and his precious daughters, Jean Miller Waterbury and Anne Miller Plata. As per John's wishes, his services will be private with his family celebrating his extraordinary life and love. In lieu of flowers, John would want donations to be made to one of his two favorite charities - St. Jude Children's Research Hospital and Visalia Rescue Mission. The Law of Conservation of Energy states that energy can be converted in form and cannot be created nor destroyed. When the shell is no more our essence enters the universe and is merely in waiting to be rearranged...see you around the universe my sweet Baboo... Services have been entrusted to Salser & Dillard Funeral Chapel. Memorial Tributes and condolences may be offered by logging onto www.salseranddillard.com.

John J. Miller passed away with his beloved wife and sons at his side on Wednesday, September 22, 2021 after a short fierce battle with acute myeloid leukemia. He was a long time resident of Visalia, California. John was born February 2, 1937... View Obituary & Service Information

The family of John Jude Joseph Miller created this Life Tributes page to make it easy to share your memories.

John J. Miller passed away with his beloved wife and sons at...

Send flowers to the Miller family.