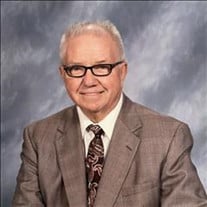 John Mann, 91, died on April 11, 2022 peacefully in his sleep. John was born in Pontiac, Illinois to George W. Mann and Hettie A (Lewis) Mann on July 2, 1930. John was a man of deep faith and attended Christ Lutheran Church in Visalia since 1968. Over the years he served faithfully as steward of the Lord. He was also active in the western states area of the Evangelical Lutheran Church for 25 years serving in many positions and speaker at several annual conferences. Among many local charities that he participated in, he was a key founding member of the local Habitat for Humanity organization. John enlisted in the US Navy in 1951 until 1955 in the secret services branch, achieving the rank of Communications Technician 2nd Class. He served in stations in California, Washington D.C., and London, England before spending 2 1/2 years in Europe and Western Asia. In 1950 John graduated from electronics school in Chicago and worked as an engineer with the Motorola Corp. In 1960 the family moved to Los Angeles, California where he completed his science degree in 1965. This is when he began his 25 years working in the field. He worked for Warner Brothers Movie Studio in Burbank until he moved to Visalia. He worked for the County of Tulare as their director of Data Processing Department until he retired in 1989. John is survived by his daughter, Robin Mathews, son-in-law, Don Mathews and granddaughter, Abby Mathews. Son Jeffrey Mann. Nephews and nieces: Charles Holz, Ill; Rev. Wilbur (Debra) Holz; Gary (Nancee) Albeck; Sheree Jones; Roger Albeck; Jon (Chynnon) Albeck and Julie (Joey) Brouillette. John is preceded in death by grandson, Kyle Mathews; ex-wife, Grace Mann; his sisters Erma I. Kennedy, Phyllis Albeck, Marie Turner; Wilma Holz and brother, Lewis Mann. Brother-in-laws, Stan Albeck, Doc Kennedy, Robert Holz and Joe Turner. Services to held at Christ Lutheran Church on April 27, 2022 @ 1pm. In lieu of flowers please make a donation to Christ Lutheran Church Celebration of Life Fund. He will be buried alongside his parents in Illinois at a later date. Services have been entrusted to Salser & Dillard Funeral Chapel. Memorial Tributes and condolences may be offered by logging onto www.salseranddillard.com.

John Mann, 91, died on April 11, 2022 peacefully in his sleep. John was born in Pontiac, Illinois to George W. Mann and Hettie A (Lewis) Mann on July 2, 1930. John was a man of deep faith and attended Christ Lutheran Church in Visalia since... View Obituary & Service Information

The family of John Junior Mann created this Life Tributes page to make it easy to share your memories.

Send flowers to the Mann family.