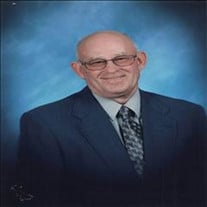 John Dykstra, Jr. 83, of Visalia, CA went home to be with his Lord and Saviour on Thursday, February 10, 2022. John was born to John & Wilma Dykstra. Born at home in Bellflower, CA on April 22, 1938. John grew up on the dairy with his brothers Pete and Dick. He attended Bellflower Christian School. At an early age his love for music began. He started on the piano but his real passion was the organ. On July 24, 1962 he married the love of his life Jeanette Jorritsma. They had 3 children: Ted, Dave and Julie. In 1970 the family moved to Ontario, CA. He enjoyed the dairy life along with his dad and his brother Pete. They were long time members of Church on the Hill in Norco, CA. John was extremely involved at church thru playing the organ for choir, weddings, funerals and Sunday services. He also served as an Elder. John's love for gardening showed in his well-manicured yard and his beautiful flower beds. John loved his family and enjoyed watching and being involved with what made his kids happy. The family loved to be together while snow skiing, water skiing, and taking the trailer to many locations. Palm Springs was a real favorite for John. In 2004, John & Jeanette moved to Visalia, CA. Becoming members of Tulare Community Church, John continued his church involvement and sharing his musical talent at his new church home. The Visalia home showcased his love of music. As you entered the front doors, the pipe organ was prominently placed in the family room. Christmas time was a special time at the Dykstra home with the singing of Christmas carols around the organ. These are cherished memories with the grandchildren. After retiring from the dairy, he was involved with landscaping at Sierra Village and for several years he worked as a bookkeeper at a dairy office in Pixley. In 2016 they moved to Sierra Village. John is survived by his wife of 59 years Jeanette, his three children Ted, his wife Debbie (now of Las Vegas, NV), Dave, his wife Kari (now of Tulare, CA), Julie Bonner, her husband Mike (now of Bigfork, MT), 11 grandchildren and 6 great-grandchildren. He is also survived by his brother Pete, sister-in-law Gert, brother Dick, and sister-in-law Dorothy. In lieu of flowers, gifts and contributions can be made in John Dykstra's name to: Sierra Village 1 Molenstraat Visalia, CA 93277 Memorial services will be held 11:00 AM - 12:00 PM Thursday, February 24th, 2022 at Tulare Community Church, 1820 North Gem St., Tulare. Services have been entrusted to Salser & Dillard Funeral Chapel. Memorial Tributes and condolences may be offered by logging onto www.salseranddillard.com.

John Dykstra, Jr. 83, of Visalia, CA went home to be with his Lord and Saviour on Thursday, February 10, 2022. John was born to John & Wilma Dykstra. Born at home in Bellflower, CA on April 22, 1938. John grew up on the dairy with his brothers... View Obituary & Service Information

The family of John Dykstra, Jr. created this Life Tributes page to make it easy to share your memories.

Send flowers to the Dykstra family.