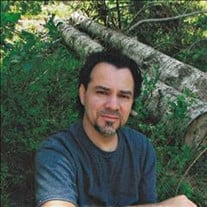 Joe Reyes left us peacefully on Friday January 28th, 2022. He was 53 years old and lived a very fulfilling life, we wish it could have continued but we understand that God has other plans. He left this world after battling an aggressive cancer that was unexpected. He showed his strength and resilience fighting everyday to be with his family. Ultimately, they decided that the best place to be was at home together surrounded by friends and family instead of a hospital. He and his family were lucky enough to be together during his passing in their home. He was born on November 4, 1968 in Guadalajara Mexico. He spent his first years in Mexico until he came to the United States when he was 12 years old. He always had countless adventures about his time there. He was a proud graduate of Redwood High School here in Visalia. Joe went on to work at Saputo Cheese Inc, where he was lucky enough to be surrounded by friends throughout his more than 25 years of service. Where he truly shined was when he was surrounded by friends and family. As a friend, Joe was a hardworking person who always had a lending hand or ready with a joke to make someone's day. He would readily impart his advice to his friends. As a brother he was giving and generous. Welcoming everyone into his home. Where family could gather around birthdays, celebrations, and casual visits. He would not hesitate to help anyone of his siblings if they were in need. As a grandfather. He was the most caring grandpa any child would want. He brought joy to his grandson by introducing him to the wonders of being outside in the yard, something so simple but grand at the same time. His favorite pastime was spending time with his grandchild, which brought sounds of glee while they were both having fun. As a father he was the best father anyone could want. He was a loving father to his children. Who always was there for them and fought for his children at every turn. He would spoil them but always make sure to impart some wisdom. From his youngest to oldest. They never needed anything or even wanted anything because they had it all. We knew that we were loved, safe and accepted. This is where I think he shone the brightest but then again I may just be biased. As a son, he made sure to provide for his mom, so she would never need anything, he opened his home to her, and cared for her. He made sure to let her know that she was loved. Most importantly taking care of her was a delight and honor for Joe. He never felt burdened by his family, just always happy to bring comfort and joy to his loved ones. As a husband. He was a provider, a hardworking man that any parent would want their child to be with. He made sure she never needed anything, and that she would always be safe. He would grudgingly go places for her so she could be happy. He would praise and gloat about his wife endlessly. If I could describe my Dad in one word it would be GENEROUS. He was the most generous person ever. He would give his last dollar to anyone in need, strangers, friends, or family. He made an impact in everyone's lives, his loss is very visible. The pain is unbearable only because he was such a fixture in our lives, and if this is the pain we must bear to have known him. I am glad to have been on the receiving end of his love and generosity. Joe Reyes will be missed dearly everyday because he was always present in his loved ones life's. He not only will be missed by his family but all those who were blessed to have known him or been in his presence. Services have been entrusted to Salser & Dillard Funeral Chapel. Memorial Tributes and condolences may be offered by logging onto www.salseranddillard.com.

Joe Reyes left us peacefully on Friday January 28th, 2022. He was 53 years old and lived a very fulfilling life, we wish it could have continued but we understand that God has other plans. He left this world after battling an aggressive cancer... View Obituary & Service Information

The family of Joe Ruiz Reyes created this Life Tributes page to make it easy to share your memories.

Send flowers to the Reyes family.