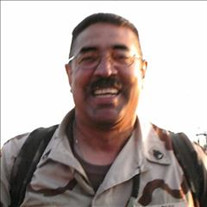 SFC Jesse David Garcia, 66 of Visalia Calif. was born March 15, 1955 to Gloria Castaneda in Merced California. He lost his battle with cancer on April 24th, surrounded by his family at home. He served 31 years in the Military, including US Army and Army National Guard. Jesse also served in Operation Iraqi Freedom. He retired from the California Army National Guard in 2015. Jesse met Margaret Jimenez in 1980. They were married on February 4, 1984 in Woodlake CA. Jesse was an avid football fan and spent many Sundays shouting at the TV. As a loyal Raider fan, he attended games in Los Angeles, Oakland and had plans to travel to the Las Vegas Raider Stadium. To say Jess was a loyal Raider fan is an understatement, he was passionate. In fact, he was so passionate he built a Raider Man Cave. If you are ever in Vegas, look for his legacy brick "Raiders #1 Fan SFC Jesse Garcia Go R8Das" at Allegiant Stadium. After retirement, Jesse's new hobbies included woodworking and riding his Kawasaki Vulcan. He enjoyed building projects for family, friends and the Village Preschool. Jesse loved to cruise on his motorcycle but never without his Go-Pro. Naturally, he gravitated to service and proudly joined the Patriot Guard Riders organization in 2016. He is survived by his wife of 37 years Margaret Jimenez-Garcia, Visalia CA. His children from a previous marriage, Jesse and Jessica Luna. His siblings Gloria Chavez, Robert Hidalgo Jr., Barbara Mendoza, and Sandra Flores. His grandchildren Zoey, Emily, Ruben, Jillian, and Carlos. Numerous nephews and nieces. His dog Buttons. He is preceded in death by his mother Gloria Castaneda, brothers Daniel Mendoza and Carlos Castillo. And his beloved dog Lucky. Viewing will be held 4:00 PM - 7:00 PM Monday, May 10th, 2021 at Salser & Dillard Funeral Chapel, 127 E. Caldwell Ave., Visalia. Graveside services will be held 10:00 AM Tuesday, May 11th, 2021 at Woodlake Public Cemetery, 165 N Cypress St, Woodlake. Services have been entrusted to Salser & Dillard Funeral Chapel. Memorial Tributes and condolences may be offered by logging onto www.salseranddillard.com.

SFC Jesse David Garcia, 66 of Visalia Calif. was born March 15, 1955 to Gloria Castaneda in Merced California. He lost his battle with cancer on April 24th, surrounded by his family at home. He served 31 years in the Military, including US... View Obituary & Service Information

The family of Jesse David Garcia created this Life Tributes page to make it easy to share your memories.

Send flowers to the Garcia family.