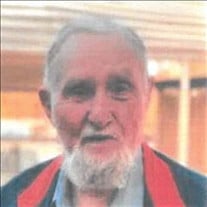 Jerry Wayne Lowe 83, of Visalia California passed away in the comfort of his home on September 18th, 2021 with family and his loving dog "Miss Daisy" by his side. Jerry was born on April 19th 1938 in the Great State of Missouri. Jerry grew up in Missouri and lead a rough life even surviving polio at the age of 15. He served in the United States Military and shortly after that his life changed forever by meeting the love of his life, Elice Hatley, becoming husband and wife on April 19th 1958. Jerry worked several odd jobs before and after them moving to California in 1962. He then started working as a mechanic at a business in Visalia, becoming a partner then purchasing the business later known as J and J Auto. Jerry ran this successful business with his son Randy and daughter Sharon for many years. Jerry was a self-taught mechanic and was well known for his abilities to fix anything, even if he had to make the part himself. While raising three children of their own in 1980, Jerry and Elice opened up their home as Foster Parents for children of all ages and special needs raising them also as their own. In 1996 Jerry semi-retired and worked at Visalia Radiator until reluctantly retiring for good in 2017. Jerry was a devoted father and grandfather. He enjoyed camping, riding motorcycles and even spent many years at the local flat tracks racing motorcycles. Jerry enjoyed watching Nascar with his wife Elice and golfing with his buddies. Jerry also had a green thumb and was known for Okra garden with plants reaching up to twenty feet. His true joy was always his family. Jerry will be deeply missed by all that knew him. Jerry is survived by his wife, Elice Lowe, two daughters, Sharon Lowe and Missy Wilder, seven grandchildren, David Lowe, Michael Lowe, Alan Lowe, Danielle Ward, and Matthew Dungan. Hannah Dungan and Hailey Dungan, with eighteen Great Grandchildrcn. He is also survived by one brother, Kenneth Lowe with wife Masie and two sisters, Erma Boldt with her husband Butch and Charlotte Alfred with her husband Harold. Jerry is preceded in death by his parents, Everett and Katie Lowe, three brothers, Ray Lowe, Larry Lowe, Jimmy Lowe and his son Randy Lowe. The family would also like to thank Kaweah Health & Hospice. Services have been entrusted to Salser & Dillard Funeral Chapel. Memorial Tributes and condolences may be offered by logging onto www.salseranddillard.com.

Jerry Wayne Lowe 83, of Visalia California passed away in the comfort of his home on September 18th, 2021 with family and his loving dog "Miss Daisy" by his side. Jerry was born on April 19th 1938 in the Great State of Missouri. Jerry grew... View Obituary & Service Information

The family of Jerry Lowe created this Life Tributes page to make it easy to share your memories.

Jerry Wayne Lowe 83, of Visalia California passed away in the...

Send flowers to the Lowe family.