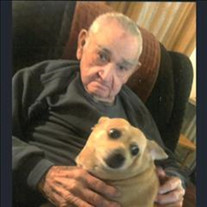 Jerry Hawkins, 85, of Visalia, Ca passed away on August 21, 2021. He was born on November 4, 1935. He married Donna on July 4, 1954. This year was 67 years together. They had 4 children. He was a truck driver most of his life until his retirement. Jerry is preceded in death by his 3 sons; Ronald Hawkins, Donald Hawkins, and Jerry Len Hawkins. He is survived by his wife, Donna Hawkins, his daughter, Karen McCormick, and her husband, Tom McCormick. He is also survived by his 4 grandchildren; TJ McCormick, Patty Gonzales, Justin Hawkins, and Kresta Hawkins. He had 10 great-grandchildren; Michelle Gonzales, Maryanne Gonzales, Thomas McCormick, Kaylee McCormick, Stevi Bleadsaw, Brianne Devore, Ethan Hawkins, Brody Hawkins, Aspen Hawkins, and Levi Plank. And his beloved dog Missy. A Visitation will be held on Wednesday, September 1, 2021, from 10:30AM-11:30AM at Salser & Dillard Funeral Chapel, 127 E. Caldwell Ave., Visalia, CA 93291. There will be a Graveside service to follow, on Wednesday, September 1, 2021 at 12:00PM at Visalia District Cemetery, 1300 W. Goshen Ave., Visalia, CA 93291.

The family of Jerry D . Hawkins created this Life Tributes page to make it easy to share your memories.

Send flowers to the Hawkins family.