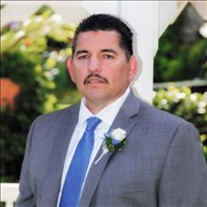 Javier Serna, 55 of Tulare, California, died on July 25, 2021, in Tulare, California. Javier was born to Juvencio Serna and Maria Mercedes Alonzo on March 1, 1966 in La Joya, Texas. Javier grew up in Woodville and graduated from Monache High School. It was back in school Javier's love of sports and especially boxing began, he even fought and won the golden gloves. As an adult his love of sports continued refereeing basketball for over 18 years. He also trained boxers and participated in the Corrections Battle of the Badges. He married Jennifer Chavez on Saturday, June 14, 2014, in Monterey, CA. Together they raised their two daughters Berlyn and Beya. He loved being a father and took pride in participating in his kids school and functions. He was always proud to take his girls to their Father Daughter dances to show them off. He worked as a Correctional Officer for the State of California for over 21 years. Javier was most known for his generosity and desire to help everyone he met. Friends, family, neighbors and strangers alike flocked to his house for fun, games and pizza night. Everyone will miss his jokes and laughter. Javier is survived by his wife Jennifer Serna of Tulare, CA; four children, Moises Serna (Amanda), Ulyses Serna (Reann), Berlyn Serna, and Beya Serna; four grandchildren, Gerardo Serna, Francisco Serna, Eulia Serna, and Elise Serna; four siblings, Hector Serna, Lourdes Serna and Augustina Ortiz (Ruben); and his Soon-to-be Grandson, Richardo Serna. He is preceded in death by his parents Juvencio and Maria Serna; one granddaughter, Kosette Serna and brother Raul Serna. Javier fought hard to stay with his family, although he's gone he will continue to watch over his friends and family till they meet again. Visitation will be held 4-7pm Sunday, August 8th, 2021 at Salser & Dillard Funeral Chapel, 127 E. Caldwell Ave., Visalia, with Eulogies to be read at 530pm. Graveside services will be held 10:30 AM Monday, August 9th, 2021 at Woodville Public Cemetery, 17203 Ave 168, Woodville, CA. Services have been entrusted to Salser & Dillard Funeral Chapel. Memorial Tributes and condolences may be offered by logging onto www.salseranddillard.com.

The family of Javier Serna created this Life Tributes page to make it easy to share your memories.

Send flowers to the Serna family.