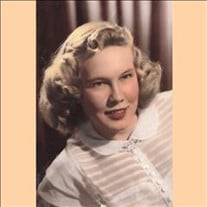 Janet Lenore Carr, of Visalia, passed away and met her Lord and Savior, Jesus Christ on May 25, 2021, at the age of 88. She was born June 14, 1932 to Ralph and Marie Coleman in Elkton, Oregon. The family moved to Colton, California when Janet was in the 6th grade. She graduated from Colton High School in 1950. Shortly after graduation her father was transferred to Lindsay, where he managed an auto parts store. Janet attended Porterville College, it was during this time that one of her friends invited her to go swimming. Janet thought they were going to the city "plunge." Instead they ended up at the home of Ted Carr and swam in his family's pool. This was a rarity in the 1950's, even in the valley. They soon started dating and were married on February 2, 1952. Jan was a stay at home mom while her husband Ted was a partner at Rembac's Blockyard, a building material and concrete block plant. After fifteen years in business he sold his interest in the company to Frank Rembac. In 1967 Ted and Jan got their real estate licenses together and opened Carr Reality. They remained in business until 1994. Jan went on to become the first woman to serve as the Executive Officer for the Visalia Association of Realtors. She served in that position for 13 years. Jan was a long time member of Grace Lutheran Church and was active in a variety of ministries in her younger years. She is also a member of Beta Sigma Phi Sorority. Jan was a volunteer with Mended Hearts at Kaweah Delta Hospital. She and her husband Ted helped those adjusting to life after suffering a heart attack. Jan loved spending time at the central coast, especially Cayucos, Morro Bay and Cambria with family and friends. Jan loved going to their cabin in Shaver Lake which they co-owned with Randy and Doreen Forrester. Many happy, fun filled days were spent riding horses, boating, hiking, playing cards and throwing horse shoes. Many special moments were made at the "lodge" with "The Dirty Dozen" as well as family. Jan was preceded in death by Ted Carr, her husband of 62 years. Her parents and her brother Bob Colemen. As well as her son, Douglas Carr and granddaughter Yvonne Carr. She is survived by her daughter, Linda Sherwood and her husband Tom. Son, Russell Carr and his wife Yvette. Daughter-in-law Becky Valenzuela and her husband Hector. She has five grandchildren, Brian Sherwood and his wife Leslie, Preston Carr and his wife Jennifer, Spencer Carr and his wife Kathleen, Matthew Carr and his wife Jessica, and Sarah Smigiera and her husband Adam. Janet has seven great grandchildren. A Celebration of Life will be held on Saturday, August 21, 2021 at 11:00am at Gateway Church of Visalia, 1101 S. Sowell St., Visalia, CA 93277. In lieu of flowers Janet requested donations to be made to the American Cancer Society or The American Heart Association.

Janet Lenore Carr, of Visalia, passed away and met her Lord and Savior, Jesus Christ on May 25, 2021, at the age of 88. She was born June 14, 1932 to Ralph and Marie Coleman in Elkton, Oregon. The family moved to Colton, California when Janet... View Obituary & Service Information

The family of Janet Lenore Carr created this Life Tributes page to make it easy to share your memories.

Janet Lenore Carr, of Visalia, passed away and met her Lord and...

Send flowers to the Carr family.