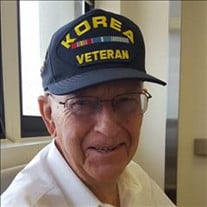 James Raphael Maxwell, "Jim" to all that knew him, of Visalia, CA left this life for his heavenly reward on April 23, 2021 at the age of 89. While struggling with dementia and complicated health in his final years, he still greeted each day with a smile. Jim is survived by his loving wife of 61 years, Barbara; children Jim, Tom, Jean Matsumura, Julie and John; four grandchildren and two great-grandchildren; his sister Bobbye Sweny; and many loving in-laws, nieces, nephews and extended family members. Throughout his life he was a loving father figure, coach, scout leader, teacher, and friend to all he knew. Born December 30, 1931 in Floydada, TX to Irene Cardinal and John Maxwell, Jim and his brothers Henry, Lester and the Rev. John Maxwell were ultimately raised by his mother and older sisters Aileen (Weber) and Bobbye in Hawthorne, CA which instilled in him a fierce devotion to family, as well as his deep Catholic faith. Those that know Jim's love of food would be surprised to learn he was such a picky eater as a child, that when he ran away from home at the age of 5 - circumnavigating almost his entire block - when asked by the friendly police officer that saw him what his name was, he replied "James Ray Eat!" Jim attended Leuzinger High in Lawndale where he excelled in playing baseball and football, before attending El Camino Jr. College. Enlisting in the Navy in 1952 and serving as Pfc. Supply 3rd Class thru 1956, he was a proud Veteran of the Korean War. He took that experience to start a career at TRW Systems where he became a Sr. Project Coordinator. Jim was proud of being a part of the TRW team that was responsible for the development of the abort-guidance systems for the Apollo lunar-landing module and that safely brought the Apollo 13 astronauts home. Always seeking to provide the best life for his family, in 1971 Jim relocated them all to Visalia, where he started a new career in real estate, his primary interest being in commercial and residential development properties. He served as the Director of Religious Education at Holy Family Church. For many years Jim and Barbara hosted the local American Cancer Society's Gala Fundraiser, where he loved to be a part of this great cause as much as he loved to swing dance to country and classic songs with the love of his life. He will long be remembered for his generous spirit, his big heart, love of teaching his faith to young adults and children, caring for his heirloom orchids, and his epic gumbo feasts around the holidays that were open to all. A Rosary will be held at 8:30am on May 5th at St. Mary's Catholic Church followed by Mass at 9am. Final ceremonies with Military honors will be at 11am at Visalia Cemetery. In lieu of flowers the family asks that donations be made to Central Valley Honor Flight which honors Veterans by sending them to Washington D.C.. https://cvhonorflight.org/donate-now/ Services have been entrusted to Salser & Dillard Funeral Chapel. Memorial Tributes and condolences may be offered by logging onto www.salseranddillard.com .

James Raphael Maxwell, "Jim" to all that knew him, of Visalia, CA left this life for his heavenly reward on April 23, 2021 at the age of 89. While struggling with dementia and complicated health in his final years, he still greeted each day... View Obituary & Service Information

The family of James Raphael Maxwell created this Life Tributes page to make it easy to share your memories.

James Raphael Maxwell, &quot;Jim&quot; to all that knew him, of Visalia,...

Send flowers to the Maxwell family.