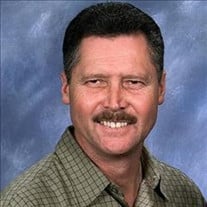 James Robert German went home to be with his Lord and Savior on April 10, 2021. Jim was born on June 24, 1951 in Visalia, California. He attended all Visalia schools and C.O.S., where he met his wife, Billie Diamond. Married for 48 years and having no children of their own, loved on their very special nieces and nephews. Jim liked taking his nephews hiking in the Sierras, where he climbed Mt. Whitney five times. His love for the outdoors never waned, as you could find him on his favorite golf course, here in Prescott, Arizona, where he and his wife moved to 12 years ago. Jim's law enforcement career started with the Tulare Co. Sheriff's department and ended with the Visalia Police Department, totaling 30 years and becoming a Sergeant. He made some lifelong friends there and he really enjoyed the challenges of being a police officer. Jim was a quiet man who didn't like fanfare, preferring to stay in the background, but he was such a helper and could be counted on to volunteer for clean-up duty at Canyon Bible Church or working on the security team. Jim had a true servant's heart, as evidenced by his extreme spoiling of his wife. His favorite saying was "I do everything around here!" and my favorite saying was "Jim likes to cook and I like to let him." Sharing his bounty with the neighbors, they're going to miss that. Every morning, you could find Jim sitting in his favorite recliner, drinking coffee, reading the Bible, staying close to his Lord was a priority. He is survived by his wife, Billie; brother, Jack (Glenda) German; sister-in-law, Gayle Bearden (Dave); mother-in-law, Thelma Diamond; nephews, Garrett, Drew, Blake, Blain and Mike; nieces, Danette, Andrea, Kelli and Laura; 35 grandnieces and nephews (and they are grand); one great-great niece and one soon to be great-grandnephew. He was preceded in death by his parents, John and Kathleen German and his father-in-law, Bill Diamond. Jim was loved and adored, appreciated and missed by those who knew and loved him, especially his wife. It's hard to sum up the life of a man in a few sentences when he meant so much to so many. But I would be remiss if I didn't thank the doctors and nurses at the Prescott YRMC West, who valiantly worked so hard to save Jim's life, but the Lord called him home. Memorial services will be held 2pm Saturday, May 1st, 2021 at Salser & Dillard Funeral Chapel, 127 E. Caldwell Ave., Visalia. Services have been entrusted to Salser & Dillard Funeral Chapel. Memorial Tributes and condolences may be offered by logging onto www.salseranddillard.com. In lieu of flowers, donate to Samaritans Purse or the Salvation Army.

James Robert German went home to be with his Lord and Savior on April 10, 2021. Jim was born on June 24, 1951 in Visalia, California. He attended all Visalia schools and C.O.S., where he met his wife, Billie Diamond. Married for 48 years and... View Obituary & Service Information

The family of James German created this Life Tributes page to make it easy to share your memories.

James Robert German went home to be with his Lord and Savior...

Send flowers to the German family.