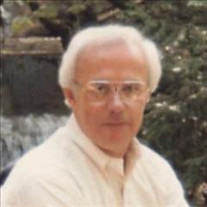 James Ronald Burr September 7, 1934 - January 19, 2022 "Jim" was born to James Ronald Sr. and Hazel Frary Burr on September 7, 1934 in Tucson AZ. He left to be with his Lord and Savior following a lengthy illness on January 19, 2022 in Visalia, CA. with his loving wife close by. Jim was preceded in death by his parents. He is survived by his wife, Virginia "Ginny/' Burr, son James R. Burr Ill of Fresno, CA, son Scott Burr of Ben Lomand, CA, daughter Rebekah Burr Siegel of Stockton, CA, stepdaughters Lynette Torgler of Tulare, CA, and Karen Golden of Stockton, CA, sister Francis Zabatini of Rohnert Park, CA, sons-in law Steve Siegel of Stockton and Adam Torgler of Tulare. He is also survived by grandchildren Nathan Siegel, Ron Golden, and Emily Golden as well as great grandchildren Karen, Deegan and Abel. As well as his good buddy Poncho, a true and devoted friend, who he enjoyed hanging out with and participating in agility trials. Jim spent his youth in the Salinas Valley. Following high school he attended Cal Poly where he graduated with a degree in Ag Sciences. After graduation, he met and married his first wife Suzanne Foster with whom he had three children. During this time he was able to turn his boyhood love of golden retrievers into the beginning of a lifelong passion for the breed by training with them for field trials. For most of his career, Jim worked in agriculture as part of upper management. First with D'Arrigo Bros in Reedley and Salinas CA working with perishable crops such as lettuce. During this time, he was instrumental in the UFW contract negotiations of the 1970's. He was also Chairman of the California Iceberg Lettuce Research Advisory Board from 1979-1982. After that, he began working with trees and vines for Pacific Ag Services, heading up their Chowchilla, Madera and Yuma offices. Following that he did a lot of good work for CCTEA where they attempted to eradicate the Tristeza disease in oranges. Once Jim retired from farming, he enjoyed the outdoors so much, he took jobs working as a power pole inspector for Southern California Edison and PGE. In this role he was able to walk the foothills each day. Many times with his trusted Golden Retriever by his side. During Jim's time at Pacific Ag, Jim met and married the true love of his life Ginny Burr in 1986. The two of them were the best of friends and a perfect match. They enjoyed spending many of their free hours packing up some cold cuts and crackers, grabbing their dogs and heading for the hills. Together they shared a love of walking in nature, photography and watching the dogs enjoy the various lakes and streams. Jim and Ginny were blessed with more than 35 years together. Jim was a valued member of many various clubs and organizations. Including both the NorCal and Southern California Golden Retriever Clubs. General Chairman of the Reedley Jaycees Shot Gun Clinic, the San Diego Hunting Retriever Club and several others. His volunteer efforts included the Citizen Advisory Committee in Visalia, his mobile home park legislation and he was a member of and one term President of the Golden State Manufactured-Home Owners League. His canine sidekick Poncho was part of a lifelong study into cancer in Golden Retrievers. He loved sharing his hobbies with his wife Ginny including working and living with his dogs, amateur photography, trapshooting, and enjoying nature, especially our local mountains. Jim was a true gentleman and a valued friend. He was loved and will be missed by many. Memorial services will be held 10:30 AM - 11:30 AM Friday, February 18th, 2022 at Visalia District Cemetery, 1300 W Goshen Ave, Visalia. Inurnment will be held 11:30 AM Friday, February 18th, 2022 at Visalia District Cemetery. For tributes, please visit morrisanimalfoundation.org/tribute Services have been entrusted to Salser & Dillard Funeral Chapel. Memorial Tributes and condolences may be offered by logging onto www.salseranddillard.com.

The family of James Ronald Burr, Jr. created this Life Tributes page to make it easy to share your memories.

Send flowers to the Burr family.