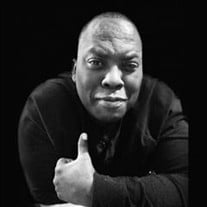 On July 22, 2021 at 10:30am the world lost an amazing man. Jamel Gibson, also known as the Chocolate Bunny, was born in Fontana, California on November 28, 1970. He was preceded in death by Father Noble D Bradshaw, Mother Margaret Dale Bradshaw, and Older Brother Wesley Gibson. He is survived by older sister Cheryl Gibson, younger sister Tiffany Johnson, and two younger brothers Ryan Gibson and Kevin Gibson as well many nieces, nephews, cousins and in-laws. He was raised in San Bernardino, California and later relocated to Visalia, California. Prior to relocating, he had a small stint in acting as a Puddy in the original Power Ranger series and a few small commercial roles. After relocating in 1995, he met his wife Susan L Fairchild Gibson and his son Anthony Jones. They soon tied the knot in 1996 and then introduced to the world a daughter, Gabrielle J Gibson in 1997, and a son Finn (Chloe) G Gibson in 2003. Jamel strived to be known as a hard worker and great provider, he was a true workaholic. He found employment immediately after moving to Visalia at Rozi's Market, Care Medical and then finally with the other love of his life, Underground Ground Technology (UTI - currently known as Utiliquest). Jamel spent 20 plus years working at Utiliquest and meeting some of his closest friends that became his family. In 1998, Jamel was hired as an underground cable locator with no experience and was quickly promoted to Supervisor. As Supervisor, he loved to give his employees motivation, mentoring and often fought with company management to protect, get raises and to hire those that he felt deserved a chance. In return, Jamel's area had a low turnover rate and his crew was loyal to him. He formed a strong bond with many of the AT&T, Verizon, Comcast, SCE and local area construction workers. His job was his world and gave 150% 24 hours a day, 7 days a week until his heart health forced him into medical retirement in 2019. Jamel's love for his children was undeniable. His eyes lit up when telling everyone about his son Anthony, who he would give his heart and life for him. His daughter Gabi, who was by his side since birth, and his son Finn referred to himself as Jamel's "mini me". He would spend hours playing video games with them, trying to keep up with the latest trends and telling stories of the days when he had his "juice drippin' jheri curl". He was the fun parent, a constant laugh fest when he was around. Jamel was 25 when he married his 23 year old bride Susan from Exeter, CA. For the next 25 years they spent almost every day together creating a love of their own. Best friends, lovers and the two of them united taking on the many bumps in the road. Hours spent laughing at jokes only known to the two. A private joke between the two earned him his nickname, the Chocolate Bunny. Jamel had a beautiful smile with an infectious laugh changing tears of sadness to tears from laughing as he shared his funny antidotes and light hearted joking. He was loyal to his friends and often referred to and treated them as brothers. One friend stated, he always looked forward to seeing him and talking to him at the end of his stressful day because he knew after speaking with him he knew he would walk away happy, laughing and feeling great. Jamel's passing will leave both an unfillable void and many, many precious memories. We will see ya on the flip side, Chocolate Bunny!

On July 22, 2021 at 10:30am the world lost an amazing man. Jamel Gibson, also known as the Chocolate Bunny, was born in Fontana, California on November 28, 1970. He was preceded in death by Father Noble D Bradshaw, Mother Margaret Dale Bradshaw,... View Obituary & Service Information

The family of Jamel Gibson created this Life Tributes page to make it easy to share your memories.

Send flowers to the Gibson family.