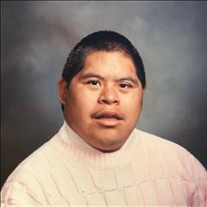 Lost Boy Goes Home Jack Gene Cheepo Jr. aka Luke passed away at the age of 58 at Jan & Gail Oaks Home, on May 20, 2021 in Tulare County. Jack's story begins at Deerborn Hospital on March 19, to Jack & Morana Cheepo. He is the fourth child to... View Obituary & Service Information

The family of Jack Gene "Luke" Cheepo, Jr. created this Life Tributes page to make it easy to share your memories.

Send flowers to the Cheepo family.