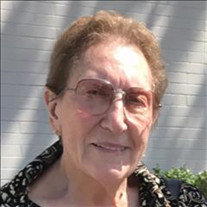 Irene M. Belca July 8, 1936 - January 17, 2022 Irene Belca was born on July 8, 1936 in Artesia, California to Antonio Linhares Correia and Herondina Raposo Correia. A few years later, her parents moved their young family to Chino and started a dairy on Palmetto Avenue. Irene loved growing up on the dairy and all that life on the dairy entailed. The daughter of immigrant parents from the Azores, she learned at an early age the importance of hard work and perseverance. At sixteen, she had to assume even greater responsibility for the day-to-day operations of the dairy when her father passed away. With his passing, her mother became a widow left to raise three young daughters alone but that didn't deter the Correia women, together they continued to operate the dairy with the assistance of Irene's brother-in-law, Serafim, and later her husband, Pierre, whom she married on June 11, 1960. H. R. Correia Dairy continued to operate as a family dairy until 1971. After the dairy sold, Irene embarked on a new career and became a private duty nurse. She loved nursing, her clients became like family to her and caring for them brought her so much joy. When she wasn't busy on the dairy or tending to her patients, Irene enjoyed helping her children with their 4-H and FFA projects, supporting their interest in youth sports, spending time with family and close friends, attending Portuguese celebrations and Basque picnics, and gardening. Irene is survived by her daughter Herondina "Dina" Belca; grandchildren Pierre Belca and Suzette Zoetemelk; two great-grandchildren; several nieces and nephews in Chino and Tulare; and some very dear friends. She was preceded in death by her parents Antonio Linhares and Herondina Raposo Correia; husband, Pierre; son, Pierre "Pete"; and her two sisters, Maria Lopes, and Evangeline Santos. A memorial service with a recitation of the rosary will be held at 10:30 a.m. on Monday, March 7th in the Chapel located inside of the Sunset Mausoleum at Bellevue Memorial Park in Ontario, California. Interment will follow at Bellevue Memorial Park in the Holy Cross section of the cemetery. Remembrances and condolences can be sent to the Belca family care of: [email protected]

The family of Irene Marie Belca created this Life Tributes page to make it easy to share your memories.

Send flowers to the Belca family.