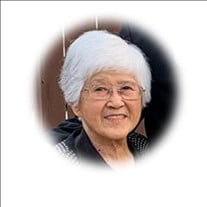 Hisaye Judy Yamashita Judy passed away February 27, 2021 in Visalia, CA, at age 82. Judy was born on July 12, 1938 in Fresno, CA, to Shinichi and Sawano Yamashita. Her family was relocated to a WWII internment camp in Poston, AZ in August 1942. After the war ended in 1945, the family returned to their ranch in Ivanhoe, CA. Judy attended Ivanhoe Elementary School, and graduated from Redwood High School in 1957. She attended College of the Sequoias night classes studying business machines. In 1958, Judy began working at Kottmeier Equipment Company as a bookkeeper. After working there for years, she worked for Mahony and O'Dell Ford dealership also as a bookkeeper. In 1976, she went to work for the City of Visalia in the accounting department for 20+ years. She retired in 2000. When the family ranch in Ivanhoe was sold in 2004, she moved to Visalia, CA. Judy, along with her identical twin sister, June, played golf, and also bowled in a league for 10 years from 1959 to 1969 with their sister Susie and good friend Saki Doi. Judy and her sisters loved to travel, taking vacations to Canada, Hawaii, Japan, the Grand Canyon, Missouri, and all the New England states, in addition to a cruise to Mexico. Being a fan of Roy Rogers, Judy enjoyed visiting The Roy Rogers-Dale Evans Museum when it was located in Apple Valley, CA. Judy and June attended Twins Festivals in Twinsburg, OH in August 1990, and again in Long Beach, CA in September 1990, where they won 1st place in their age group. Judy enjoyed learning new things. She took up line dancing at the Senior Citizen Center, and during the advent of the home computer, she enrolled in adult classes to improve her skills and learn the latest technology. Judy never married but was "mom" to several furry four-legged pets, and beloved aunt to all of her nieces and nephews. She was a lifetime member of the Visalia Buddhist Church, where she volunteered many hours and danced in the annual Obon festivals. For ten years, she met weekly with five others to play "Hana", a Japanese flower card game. Judy was preceded in death by her parents, Shinichi and Sawano Yamashita, and sisters, Suzuko Sue Matsuda, Setsuko Betty Hasebe, Shizue Susie Yamashita, and Kastuko Nancy Yamashita. She is survived by her siblings, Aiko Hasebe, Seiji Yamashita, and June Yasuda, and numerous nieces and nephews.

Hisaye Judy Yamashita Judy passed away February 27, 2021 in Visalia, CA, at age 82. Judy was born on July 12, 1938 in Fresno, CA, to Shinichi and Sawano Yamashita. Her family was relocated to a WWII internment camp in Poston, AZ in August... View Obituary & Service Information

The family of Hisaye Judy Yamashita created this Life Tributes page to make it easy to share your memories.

Send flowers to the Yamashita family.