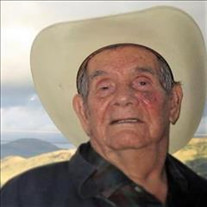 Hijinio Reynoso, Sr. of Woodlake, California passed away on Wednesday, July 14, 2021 at the age of 94. He was born to Mercedes Reynoso and Hipolita Haro on January 11, 1927 in Guadalajarita, Zacatecas, Mexico. He was the oldest of six children. Hijinio migrated from Zacatecas to Baja California in order to participate in Mexico's Homestead program with hopes of acquiring an "ejido" farm parcel in unincorporated farmlands south of Mexicali. It is here in "Ejido Cucapah Indigena" where he met the love of his life, Dolores "Lola" Luna. Hijinio and Lola married on December 29, 1952. They started their life together in an adobe house which he built himself. Shortly after, he participated in the "Bracero" program, which allowed Mexican laborers to lawfully enter the US. This program was intended to help the agriculture industry after they experienced labor shortages due to WW2. His work experience in the US introduced him to the "American Dream" which in turn motivated him to emigrate from Mexico. For the next few years he made it his goal to obtain legal migratory status for himself, his wife, and his three small children. In 1962, he and his family settled in the rich agricultural farmlands of Woodlake, California where he worked at various farms as a contract laborer; picking oranges, olives, peaches, grapes and many other produce. He ended this phase of his career by working for Peltzer Farms for over 10 years. In the late 1960's, Hijinio gave back to his community through his involvement with outreach programs, such as "La Esperanza", which were dedicated to the improvement of his beloved Woodlake. His involvement in "La Esperanza" resulted in the city's first community health clinic, which was located in the current location of Kaweah Delta Health Clinic. During his early years, Hijinio demonstrated an entrepreneurial spirit making and selling ice cream in Mexico. After settling in Woodlake, he started a trucking business hauling cantaloupes and watermelons. Many years later, at the age of 62, when Hijinio retired from farm labor, he went on to own and operate his own billiard hall, "El Texano", in downtown Woodlake for nearly 6 years. Hijinio lived his last 51 years in the same home he built alongside his sons. He loved painting, playing his violin and accordion, and he also loved nature. He had a love of gardening and spent his late years tending to the many plants in his backyard. He felt satisfaction in sharing the fruits of his labor with his family, friends, and neighbors. Hijinio is survived by his wife: Dolores Reynoso, his children: Miguel Reynoso, Aaron Reynoso (Cilisia), Esther Valencia (Heliodoro), Rosie Cofre (Carlos), Sam Reynoso (Mitra), and Hijinio Reynoso, Jr (Jocelyn). He is also survived by his brother Ramiro Gonzalez of Mexicali, Baja California, his 13 grandchildren, and his two great-grandchildren. He is preceded in death by his father Mercedes Reynoso, mother Hipolita Haro, brother Gilberto Reynoso, sister Feliciana Reynoso, brother Pilar Reynoso, brother Trino Gonzalez, and son Francisco Reynoso. He will be greatly missed by his family. We, his children and grandchildren, are eternally grateful to him for teaching us the value of hardwork and the importance of an education. For that reason, In lieu of flowers we ask that you please consider making a donation in support of an educational scholarship in his honor. Donations may be made at www.WoodlakeFoundation.org/support or by sending a check with Hijinio Reynoso Memorial Scholarship in the memo section to: Woodlake High School Foundation PO Box 475 Woodlake, CA 93286 A Viewing will be held Sunday, August 1, 2021 from 4PM-7PM at Salser & Dillard Funeral Chapel, 127 E. Caldwell Ave., Visalia, CA 93277. A Rosary will be held on Sunday, August 1, 2021 at 6PM at Salser & Dillard Funeral Chapel. There will be a Funeral Service on Monday, August 2, 2021 at 9AM at Salser & Dillard Funeral Chapel. A Graveside Service will be held on Monday, August 2, 2021 at 10:30AM at Woodlake Public Cemetery, 165 N. Cypress St., Woodlake, CA 93286.

Hijinio Reynoso, Sr. of Woodlake, California passed away on Wednesday, July 14, 2021 at the age of 94. He was born to Mercedes Reynoso and Hipolita Haro on January 11, 1927 in Guadalajarita, Zacatecas, Mexico. He was the oldest of six children.... View Obituary & Service Information

The family of Hijinio Haro Reynoso created this Life Tributes page to make it easy to share your memories.

Hijinio Reynoso, Sr. of Woodlake, California passed away on Wednesday,...

Send flowers to the Reynoso family.