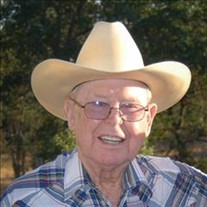 Henry Houston Mitchell July 11, 1928 - March 6, 2021 Henry, a true truck driving man, loved the road and the long hauls across country, especially to Hersey, Pennsylvania and back. He lived his dream for many years working for various companies but Tom Lang Corp (TLC) was his favorite. They must have liked him too because TLC always made sure he got the newest truck because he took care of his rig like it was his own, always sparkling clean. Henry was born in the hills of Tennessee, Lawrence County, to Arthur and Frances Mitchell, one of 10 children, the last one born in Riverdale, CA in 1938. In 1937 they moved to the Central Valley with the help of the eldest daughter, Daisy Daniels and her new husband, Leroy, whom had moved to California previously. Leroy and the family built the first camper shell cover with wooden benches to sit on to transport the family across country. Henry worked as a ranch hand, tractor driver, propane truck driver and in the 60's a pool service owner of Sparkling Pool Service in Visalia. At the age of 17 Henry joined the Army and was stationed post war in Germany where he met the love of his life Hildegard (Marion). At the end of his 3 year tour he came back to Central California bringing a wife and infant daughter, Shirley, to meet his family during Christmas time 1948. In less than three years they were blessed with two sons Henry (Sonny) and Harry where they lived in Fresno for 10 years before moving to Visalia. Both son's and two grandson's followed the example of service in the military. In 1992 Hildegard passed away from Cancer after 44 years of marriage and in short time Henry met his second wife lovely wife, Helen Drewry, and moved to Hanford for 8 years, enjoying life traveling in their motorhome back east to visit both sides of their family. After her passing Henry met adorable Bulah (Meme) Smith and lived in Madera for 14 years also traveling the USA visiting both sides of their family and special trips to the coast. After she passed he moved to Visalia living in a trailer park in Visalia enjoying many local restaurants ,Granny's Country Cafe, being his favorite. He loved the attention of so many caring waitresses. December of 2019 he was accepted into the Veterans Home in Fresno in skilled nursing area, where he passed away on March 6 in the loving care are of the nurses and staff at Cal-Vet. Henry's hobbies included motorcycle racing and poker runs with Hildegard, family camping in the mountains and beach with various sisters and their families, push-car driver for hard top racing in Clovis, family picnics and reunions, playing family poker games, and bowling leagues. Brothers and sisters include Daisy Mae Daniels, Jimmie Irene Pemberton, Richard Jim Mitchell, Casey Jones Mitchell, Vena Dorothy Haberman Girardi, Norma Dean Mitchell (died at 3 yrs old), Adell Clyde Mitchell, Mabel Grace Gonzales, and Mary Frances Campbell Yarnell. Henry is survived by one sister, Mabel Gonzalez, three children, Shirley Mitchell, Henry (Sonny) and Kathy Mitchell, Harry and Charlene Mitchell plus grandchildren, Charles and Chealyn Watson, Lindsay and Richard Miller, Jason and Trica Watson, Christy Harris, Jennifer (deceased), Amy Mitchell, David Mitchell, Andrew and Sheena Mitchell, Amanda and Michael Gonzalez, Emily Mitchell, plus many great grandchildren, great great grandchildren, nieces, and nephews It would be greatly appreciated if donations in lieu of flowers were made to Veterans Home of California-Fresno 2811 W. California Ave, Fresno, CA 93706. Services will be held March 20, 10:30 at Visalia Cemetery.

Henry Houston Mitchell July 11, 1928 - March 6, 2021 Henry, a true truck driving man, loved the road and the long hauls across country, especially to Hersey, Pennsylvania and back. He lived his dream for many years working for various companies... View Obituary & Service Information

The family of Henry Houston Mitchell, Sr created this Life Tributes page to make it easy to share your memories.

Send flowers to the Mitchell family.