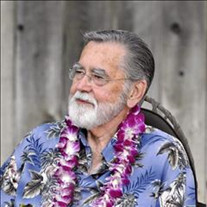 Harold Devoe Hoppert was born on October 9, 1943, to Bill and Jewell Hoppert in Fort Smith, Arkansas. He passed from this life to his heavenly home on Christmas Eve, 2021, surrounded by his children. Harold was the third of five children in his family. He was the epitome of a middle child, a negotiator and peacemaker in his family. His father surrendered to the ministry when Harold was a young boy and they moved often. Harold attended eight grammar schools. In 1957, the family made their way to San Leandro California and shortly thereafter moved to Corcoran, California where Harold met the love of his life, Glenda Lea Isenhower Hoppert. It was love at first sight, and he and Glenda dated for seven years before marrying in June 1963. They celebrated their 58th wedding anniversary on June 15, 2021. Harold's professional career was nothing short of amazing. He went to work at Armstrong Tire Corporation in 1964 at the lowest paying job in the plant, and he ended his career with them when he retired at the age of 47 as Senior Vice-President of Human Resources for Pirelli/Armstrong Tire Corporation. After retirement, he completed his bachelor's degree and then his master's degree. He also attained his California real estate brokers license and had a successful real estate brokerage for many years. Harold absolutely loved his Lord and devoted his life to his faith. Not only was he an ordained deacon in the church, but he also served as a trustee, an active member of many committees, a choir member, and a faculty member of the seminary. More importantly than any position he ever held, he truly lived what he believed in every aspect of his day-to-day life and in making decisions whether they were big or small. Family was the most important thing to Harold after his Lord. He loved his family greatly and showed it continually. He never faltered in his unending love and care of his wife and children. He enjoyed very close relationships with all his siblings throughout his entire life and was adored by his numerous nieces and nephews. He truly was the center of his family. Harold's grandchildren were the lights of his life, and they had exceptionally close relationships with him. He truly was more like a father to them with how he constantly guided and cared for them. His great-grandchildren were also a source of pride and great delight to him. The last two and a half years of Harold's life, he resided at Quail Park Memory Care in Visalia, California. Even while living with the devastating effects of Dementia, he continued to impact the lives of those around him. He carried his Bible constantly, shared his faith with others, and became a favorite of many of the staff there. The family is so grateful for the staff that cared for him. Harold was preceded in death by his wife, Glenda, earlier this year; his parents, his brothers Bill Hoppert and Dewayne Hoppert, as well as sister-in-love Donna. He is survived by his children, Carol Hays and husband Mark, Deanna OLeary and husband Michael, and Eric Wise; grandchildren Vanessa Rudd and husband James, Wesley Lane and wife Hannah; great-grandchildren Mason and Claire; siblings Doyle Hoppert and wife Kay, Christine Dill and husband J.D. "Skip," and sister-in-love Billie Sue Hoppert; many nieces and nephews, extended family, and friends. Harold's grandson and great-grandson both share his middle name. Services will be held on January 14 at 2:00 PM at First Landmark Missionary Baptist Church, 631 N. Chinowth in Visalia. Services have been entrusted to Salser & Dillard Funeral Chapel. Memorial Tributes and condolences may be offered by logging onto www.salseranddillard.com.

Harold Devoe Hoppert was born on October 9, 1943, to Bill and Jewell Hoppert in Fort Smith, Arkansas. He passed from this life to his heavenly home on Christmas Eve, 2021, surrounded by his children. Harold was the third of five children in... View Obituary & Service Information

The family of Harold Devoe Hoppert created this Life Tributes page to make it easy to share your memories.

Send flowers to the Hoppert family.