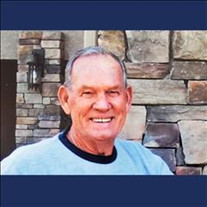 VISALIA - Gerald Bratcher, 88, of Visalia went to be with the Lord on April 18, 2022, at home with family by his side. On September 22, 1933, in Mayesville, Oklahoma, he became the third child of Clarence and Thelma Bratcher. His family moved to California when he was 6 months old and settled in Wasco. They later moved to Porterville where he attended and graduated from Porterville High School in 1951. He met his wife, La Nora Tolson of Porterville, while still serving as a radioman in the Navy and they were married one year prior to his honorable discharge in January of 1955. They welcomed the first of three children, Geri, in November of 1956 while living in Ventura and moved to Visalia shortly thereafter. They added Steve and Karen and continued to live in Visalia until his passing. He worked for the Post Office for 34 years and retired as a supervisor in 1990. Post retirement included golfing with his buddies at least three times a week, never keeping score. Football season included attending the best local high school game of the week. He loved watching his children's and grandchildren's sporting events and rarely missed a practice or game. His grandchildren brought him so much joy and he loved the many family barbeques, poker games and get togethers. His rare sense of humor will be greatly missed. He was predeceased by his parents and sisters Juanita and Lois. He is survived by his wife of 67 years, La Nora, his daughter Geri McDaniels, son Steve (Kimberly) and daughter Karen, Brothers Jim, Elmer and Mike and Sister Glenda (Taft), Grandchildren Suzanne Mosley (Justin), Stephanie Miranda (Rodrigo), Phillip Bratcher, Sarah McDaniels, Chloe McDaniels and Kimberly McDaniels, Step Grandchildren Demi Pina and Danielle Banda (Joshua) and four Great Grandchildren Macie Mosley, Max Mosley, Isabella Miranda and Sebastian Miranda and many nieces and nephews. Services will be at Rise Church on May 7th at 11:30, 5702 W. Caldwell Ave., Visalia, CA 93277 Services have been entrusted to Salser & Dillard Funeral Chapel. Memorial Tributes and condolences may be offered by logging onto www.salseranddillard.com.

VISALIA - Gerald Bratcher, 88, of Visalia went to be with the Lord on April 18, 2022, at home with family by his side. On September 22, 1933, in Mayesville, Oklahoma, he became the third child of Clarence and Thelma Bratcher. His family moved... View Obituary & Service Information

The family of Gerald Bratcher created this Life Tributes page to make it easy to share your memories.

VISALIA - Gerald Bratcher, 88, of Visalia went to be with the...

Send flowers to the Bratcher family.