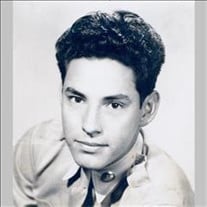 It is with deep sorrow and much love that we mourn the passing of Gustavo "Gus" Camacho, of Farmersville, Ca on Tuesday, February 23, 2021, at the age of 88 years. Gus was born on January 29, 1933 in Brawley, Ca to Antonio and Petra Camacho. He was raised in Farmersville, Ca and was a proud U.S. Air Force Veteran, serving from 1950 - 1953. After coming home, Gus continued his education at College of the Sequoias and in the State of Washington. Gus was a retired proofreader and former activities director at Tulare View Mental Hospital. He dedicated his life as a political activist and community leader in his hometown of Farmersville. On May 23, 1980, he married Gloria Camacho. They raised three daughters, Teresa and Margarita, and one son, Kennedy Gustavo. In 2017 Gus was honored with a Proclamation for his lifetime of service to the community of Farmersville. Gus was multi-talented and enjoyed sharing that gift with those around him. He was a country-western and Tejano musician and well known for entertaining crowds as an Elvis Tribute Artist. He was proud of his Mexican and American Heritage and demonstrated this through his music and impeccable fashion style. Gus was also a brilliant drawing artist and portraitist who never outgrew his childhood love for superheroes and creating comics. He also loved to experiment with new ideas, puzzles, and could beat any contestant on Jeopardy. [Growing up during the Great Depression he lived and experienced extreme poverty and thus spent his life instilling the importance of education and workforce training in his community. He advocated to bring a high school and library to Farmersville and saw those efforts come to fruition for his community, but most importantly, for his children whom he worked so hard to make that a reality for.] Gus was preceded in death by his father, Antonio, and his mother, Petra as well as his 9 brothers and sisters: Jesus, Ramon, Tony, Victor, Prudence, Enedina, Eileen, Celia, and Carmen. He will be lovingly remembered by his wife Gloria of 41 years, his three children, Teresa, Margarita, Kennedy Gustavo, two granddaughters Lilah Belle and Myla Rae, and several cousins, nieces and nephews. Services will be held at Salser & Dillard Funeral Chapel in Visalia. Visitation will be on March 24th from 4-7pm, with a Prayer Service starting at 6pm. Funeral Service will be on March 25th from 8:30 - 10:30am. A live streaming link will be available on the Salser & Dillard website for those unable to attend. A private burial for immediate family will follow the services. Memorial donations may be made to CSET for senior meals at cset.org/donate

It is with deep sorrow and much love that we mourn the passing of Gustavo "Gus" Camacho, of Farmersville, Ca on Tuesday, February 23, 2021, at the age of 88 years. Gus was born on January 29, 1933 in Brawley, Ca to Antonio and Petra Camacho.... View Obituary & Service Information

The family of Gustavo Camacho created this Life Tributes page to make it easy to share your memories.

It is with deep sorrow and much love that we mourn the passing...