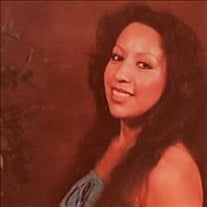 Our Beautiful Mommy, Nana, Sister, and Aunt Gloria was born in McAllen TX on February 8th, 1956 and grew up in Lindsay CA. Gloria worked in the fields at an early age picking oranges and olives in the Lindsay area with her family. During the summers she would move to Yuba City with her family to help pick prunes. Gloria always put family and friends first before herself and that is what was so special about her. Anyone who ever met her knew she was one of a kind and loved her so much. Gloria had the biggest heart and loved all her family dearly. . At the age of 22, Gloria and her 3 year daughter (Deanna) traveled to Fort Hood, TX. to babysit her new born nephew James Graves while her Sister Elbia Graves was sent overseas by the military until James was able to go be with his parents, that showed how much she went above and beyond for her family. At the age of 25 Gloria graduated with her nursing degree and became a OB nurse at Sierra View District Hospital. Gloria was a OB nurse for over 25 years and loved all her babies she helped deliver and would ALWAYS come home with gifts from parents who she helped, she also delivered a couple babies on her own when the doctors didn't make it on time and had a few dad's pass out on her while their wives were delivering their babies. Gloria was one amazing nurse. Gloria gave her daughter Deanna the best life ever even though she became a young single mom at 19 years old. Gloria spoiled her daughter so much, she would take her to Disneyland at least twice a year, Universal Studios, Knotts Berry Farm, The Queen Mary, The Wax Museum, The Hollywood sign, Santa Cruz, The Winchester Mystery House, you name it, she lived for her young daughter even though she was young herself. On May 9th, 1987 Gloria's son Ismael Salazar Jr was born . Once Jr was born she spoiled him just as much as Deanna, maybe even a little more. Gloria enjoyed her family and friends, she loved watching her grandchildren so much and also loved going to Tachi and Las Vegas. Gloria was a woman of God and prayed to her Lord up above daily. Gloria didn't have one mean bone in her body, she was such a happy person and her smile was contagious. She is survived by her two children, Deanna Renovato (Juan) and Ismael Francisco Salazar Jr.; Three grandchildren, Maiquel Marie Renovato, Michael Alexander Renovato, and Maryssa Marie Renovato; Four siblings, Elbia Graves, Abel Camacho (Alice), Louie Camacho (Dolores), and Jamie Camacho (Reyna); Grandpuppy, Lexi Marie Renovato and quite a few nephews and nieces. She is preceded in death by her parents, Ines and Anselmo Cruz Camacho and two brothers, Manuel Camacho and Rudy Camacho. Gloria had the biggest heart in the world, she will forever be tremendously be missed by everyone who knew her. A Celebration of Gloria's life will be held on Saturday, February 12, 2022. Services have been entrusted to Salser & Dillard Funeral Chapel. Memorial Tributes and condolences may be offered by logging onto www.salseranddillard.com.

Our Beautiful Mommy, Nana, Sister, and Aunt Gloria was born in McAllen TX on February 8th, 1956 and grew up in Lindsay CA. Gloria worked in the fields at an early age picking oranges and olives in the Lindsay area with her family. During... View Obituary & Service Information

The family of Gloria Camacho created this Life Tributes page to make it easy to share your memories.

Our Beautiful Mommy, Nana, Sister, and Aunt Gloria was born in...