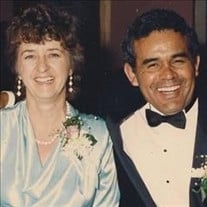 Gabriel Reynoso, beloved husband, father, and grandpa joined his mom, dad, and step-dad in heaven on December 29, 2021. He passed from a brief respiratory illness including COVID, pneumonia, and stomach upset. Gabriel was born on February 13, 1944 to Pete and Phyllis Reynoso of Visalia. He was the second son out of 6 children. He married the love of his life Francine on her 17th birthday and together they raised a family in Visalia. After he obtained his contractor license he built a general contracting business. As a little boy, he loved taking things apart to see what made them tick. Many have been blessed with homes built by Gabriel's hands. His children and grandchildren have good memories of watching him build and learning from him. He loved digging trenches with his tractors, and it was a rite of passage for his children and grandchildren to ride on them. They will always treasure their time spent with Grandpa on his beloved tractors. Gabriel is survived by his son Gabriel (Van) Do-Reynoso, and granddaughters Rebecca (Seth) De Los Santos, Bethany (Cesar) Jaramillo, and Sarah; son Eric (Stefanie) Reynoso, and grandchildren Rory McCracken and Michelle McCracken and her 4 children; daughter Lisa Zapata and grandson Zachary, with Lisa's husband Robert and daughter Veronica preceding in heaven; and son Jonathan (Vivianne) Reynoso and grandchild Jeremy. Gabriel is also survived by his two brothers Pete and Manuel, and his three sisters Dolores, Clorinda, and Christina, and many nieces and nephews. Gabriel was a firm believer in God, and was often seen wearing his "I love Jesus" hat or t-shirt. He practiced his faith by being kind to people around him and attending mass faithfully. He was generous and loved everyone. He was always ready to give his time and money to those in need, no matter the circumstance. He was a doting grandpa who took his grandchildren on bike rides, camping trips, adventures, snack runs, and most importantly church. Gabriel also loved and cared for animals. If he saw a stray unwanted dog, he would bring it home. He was also known to drive many a mouse out to the river to set them free. He used to go jogging along the same river bank in his younger days, and would jump into the water to cool down. He always said he could run circles around us. Grandpa also was known to love his long naps, followed by his favorite comedies like Gomer Pyle and Andy Griffith. He had a great sense of humor about life. Visitation will be held 4-6pm Thursday, January 27th, 2022 at Salser & Dillard Funeral Chapel, 127 E. Caldwell Ave., Visalia with the Rosary to be prayed at 6pm. Mass of Christian Burial will be Celebrated 9am Friday, January 28th, 2022 at St. Mary's Catholic Church, 608 N. Church Street, Visalia; with burial to follow at Visalia District Cemetery, 1300 W Goshen Ave, Visalia. Services have been entrusted to Salser & Dillard Funeral Chapel. Memorial Tributes and condolences may be offered by logging onto www.salseranddillard.com.

Gabriel Reynoso, beloved husband, father, and grandpa joined his mom, dad, and step-dad in heaven on December 29, 2021. He passed from a brief respiratory illness including COVID, pneumonia, and stomach upset. Gabriel was born on February... View Obituary & Service Information

The family of Gabriel Reynoso, Sr. created this Life Tributes page to make it easy to share your memories.