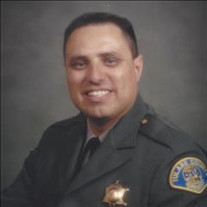 Gabino (Gabe) Perez Cano (December 22, 1960 to April 14, 2021) passed peacefully at his home surrounded by his wife, children, mother, siblings, nieces, and nephews. Gabino, son of Alvaro and Genevieve Cano, was born in Phoenix, Arizona and spent most of his life in the Central Valley. Gabe was preceded in death by his father, Alvaro. Survivors include his faithful and devoted wife, Olga, and his most enduring legacy, his sons Gabe Jr. and Joshua. He is also survived by his mother, Genevieve, his brothers Leandro (Debbie), Alvaro (Brenda), Stephen (Nina), Chris, Albert, and John (Cynthia), and his sisters Mary Lindsay (Scott), Genevieve Rangel (Val), Angie Campa, and Santos Bailey. Part of his enormous legacy includes his relationship with his many nieces and nephews. Gabe was raised in Hanford, graduating from Hanford High School, the College of the Sequoias, and Fresno State. Gabe began his more than 30 years of law enforcement service with the Fresno State Reserve 108 Program. During his career he worked for Fresno County, Kings County, Fresno Police Department and retired as a Sergeant from the Tulare County Sheriff's Department in 2011. Gabe served as the Latino Peace Officers Association President for many years and took pride in being part of LPOA's efforts to provide scholarships for deserving students in the Central Valley. Gabe's generous and tenacious spirit will live on through his sons and those he served in his community. Gabe will best be remembered by his love for his family, his love of travel, his sense of humor, his steadfast belief in the San Francisco 49ers, his compassion for others, and his ability to talk to anyone about anything. He was a hardworking man with a strong sense of right and wrong. His mission in life was to provide for his family, his parents, his wife, and his sons. A mission that will reverberate for years to come. To say that Gabe will be missed by all would be quite the understatement. Visitation will be held April 27 from 4-7pm with a Rosary to be prayed at 5pm at Salser & Dillard Funeral Chapel, 127 E Caldwell Ave, Visalia. A Mass of Christian Burial will be celebrated on April 28 at 11am at St. Brigid Catholic Church, 200 E. Florinda St., Hanford, followed by a private burial for family and uniformed personnel. Services have been entrusted to Salser & Dillard Funeral Chapel. Memorial Tributes and condolences may be offered by logging onto www.salseranddillard.com.

The family of Gabino Cano created this Life Tributes page to make it easy to share your memories.

Send flowers to the Cano family.