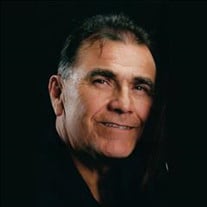 Frank Lucian Galaviz Skilled Truck Fabricator February 18, 1953 - October 27, 2021 Our adored husband, father, brother, uncle, cousin, and grandfather Frank L. Galaviz suddenly entered the gates of heaven from home on October 27, 2021 at the young age of 68. He was born and raised in Tulare to Ambrose and Ruth Galaviz. Frank married his first true love and soulmate, Nancy Garcia on July 3, 1971, in Tulare. The lovebirds were married for 50 blessed years and raised three children in Tulare. He was so dedicated to Grumman Olson for over thirty years without missing one day of work when there were days he should have called in sick. He wore his dark blue Grumman Olson jacket with pride even though it was challenging work. Even with his long work schedule, he was able to make time for his family. Everyone always enjoyed Frank's smile. His smile could change the vibe of a room with one look of those green eyes and ornery grin. You just knew he was up to something. Everyone loved to gravitate to him to just hear what he had to say. He was a humorous storyteller. Frank was a funny, ornery, respectful, protective, and honorable man. He was also a true provider for his family. He always tried to do the right thing even when he loved to be a prankster. The simple things in life are what he enjoyed the most. He enjoyed camping with his family, the mountain scenery, pyro fires, and smores. We cannot forget the scary "bear stories" he told in the pitch dark with ominous noises around. When he would take the same "Big Meadows" trips with his brothers, all manners and hygiene would be left at home. He cherished his memories with his brothers when they could be men surviving the elements. They were real mountain men. After Frank's major accident at work, he persevered through his back, knee, and other injuries. He found his voice and socialized with everyone he met. Hours talking and bartering at yard sales was an absolute thrill for him to get a good deal. He managed to spend time with his grandkids at soccer games and play air hockey and play their favorite game, Aggravation. His grandkids still say, "Grandpa is a sneaky player." Frank's birds were also his zen joy along with walking his dog, Cujo. In addition to spending time with his grandkids and pets, he spent most of his days working on cars, appliances, and so many other projects. Frank literally had every tool in the world. He could meticulously fix almost anything. He loved watching YouTube channels that would show "how to" for everything. Along with fixing everything and spending time with family, he was blessed with renewing his faith in the Lord. One of his favorite places was sitting on the green bench in front of his neighbor's house sharing scripture and prayers. At the end of the day, he just loved his family and especially his wife Nancy. They were best friends. He once said, "Nancy saved me." Then Frank saved her right back when Dora Garcia passed away. He comforted Nancy with a simple caress with his loving hands and his heartwarming hug that reassured her she would be okay. Frank will be gone from our sight, but he will never be gone from our hearts. He will be truly missed forever. Frank is survived by his wife Nancy, his daughter Francine Heller and her husband Eric of Tulare, CA, his sons Frank E. Galaviz and Greg R. Galaviz both of Tulare, CA. Three grandchildren, Lacey Galaviz, Gavin Heller, and Kayla Heller all of Tulare. He is also survived by his sisters Eleanor Galaviz of Texas, Della Torres and her husband Paul of Tulare, Irene Hayes and her husband Dan of Fresno, Annie Yniquez and her husband Ray of Morro Bay, Teresa Garcia, Hope Galaviz, and Roberta Galaviz, and sister-in-law Louisa Galaviz all of Tulare, brother-in-law Mando Sandoval of Visalia, and his special niece Karina Lopez and her husband Anthony of Patterson. Frank is preceded in death by his father Ambrose, mother Ruth, brother and sister-in-law Joe and Nadine Galaviz, brother Ambrose Galaviz Jr, sister and brother-in-law Frances and Rudy Dominguez, sister-in-law Sarah Sandoval, father-in-law Gilbert Garcia, mother-in-law Dora Garcia, and brother-in-law Gilbert Garcia Jr. Visitation will be from 4:00-7pm at Salser & Dillard Funeral Chapel 127 E. Caldwell Ave., Visalia, CA on Thursday, November 18, 2021 with the Rosary to be prayed at 5:30pm and a Celebration of Life to commence at 6pm. Mass of Christian burial will be celebrated 10am Friday, November 19th at Saint Rita's Catholic Church, 924 South O Street, Tulare, CA, with burial to immediately follow at the Tulare North Cemetery, 4572 North J Street, Tulare. Services have been entrusted to Salser & Dillard Funeral Chapel. Memorial Tributes and condolences may be offered by logging onto www.salseranddillard.com.

The family of Frank L Galaviz created this Life Tributes page to make it easy to share your memories.

Send flowers to the Galaviz family.