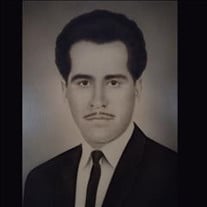 Francisco Juarez at age 88, of Visalia, California, passed on June 11, 2021, in his daughter, Coriena's home in Visalia, California. Francisco passed in peace surround by his family. Francisco was born in Jalostotitlan, Jalisco, Mexico on June 16, 1932 to Doroteo Juarez and Maria Martinez. Francisco grew up on a ranch in Mexico, where he completed his High School education and Military Enlistment, prior to legally moving to the United States. Francisco was very proud of becoming a naturalized United States citizen in November 1994. Francisco first lived in the Los Angeles area after immigrating to the United States. He often came to the Central Valley to visit his older brother Jose. Sometime during these visits he met, fell in Love and later married his wife, Maria Carrasco Lopez in Guadalajara, Mexico on February 21, 1965. Together they raised 6 children. Francisco worked several jobs but was primarily a hard working farm laborer for over 50 years for Yasuda Brothers until his retirement. Francisco's passion was gardening and raising various farm animals. He took a lot pride in his garden. Together with Maria they devoted most of their time to their grandchildren. Francisco and Maria were also devoted and dedicated to Holy Family Catholic Church. Francisco found pleasure in volunteering his time and assisting during services in any way he could. Francisco is survived by six children, Coriena Gomez (Bruce), Francisco Juarez Jr. (Victoria), Anna Ramos, Fabian Juarez (Carla), Velia Juarez all residing in Visalia, CA and Fabiola Duran of Utah; 10 Grandchildren and four great-grandchildren, Victor Diaz, Noah Lopez, Evangeline Lopez and Cash; He is also survive by one sister, Laura Carias. He is preceded in death by his wife Maria Juarez and four siblings, Maria Luisa Gonzalez, Guadalupe Juarez, Elvira Vasquez, and Jose Juarez. Francisco will truly be missed by all. Visitation will be held 4-7pm Thursday, July 1st, 2021 at Salser & Dillard Funeral Chapel, 127 E. Caldwell Ave., Visalia with the Rosary to be prayed at 6pm. Mass of Christian Burial will be celebrated 10:30am Friday, July 2nd, 2021 at St. Mary's Catholic Church, 608 N. Church Street, Visalia with burial to follow at Visalia District Cemetery, 1300 W Goshen Ave, Visalia. Services have been entrusted to Salser & Dillard Funeral Chapel. Memorial Tributes and condolences may be offered by logging onto www.salseranddillard.com.

The family of Francisco Juarez created this Life Tributes page to make it easy to share your memories.

Francisco Juarez at age 88, of Visalia, California, passed on...

Send flowers to the Juarez family.