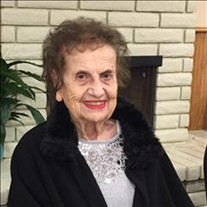 Evelyn Della Nunes passed away peacefully on June 24, 2021, at the age of 101 years old. She was born on January 8, 1920, in Lemoore, California, to Henry and Della Gomes. Evelyn was the second of four children. She graduated from Hanford High School, class of 1938. Evelyn married Anthony Nunes on January 28, 1946. The couple made their first home in Tulare, California, on the Nunes family ranch. They welcomed their first child, Gilbert, and two years later Eugene, followed by Janice. Tony and Evelyn moved to Exeter in 1952 where they began to dairy, farm, and raise children. They welcomed Anthony, then Mary, followed by Annette and Gerald. In 1964, Tony and Evelyn returned to the original Nunes family ranch in Tulare and continued the dairy farming operation. Evelyn always managed the bookkeeping by keeping the records by hand. One of her delights was learning how to conduct the bookkeeping by computer. At first, she said, "No I don't know how to use those things," but then enrolled in a senior citizen computer class. Evelyn quickly learned. She inspired her children, grandchildren, and great-grandchildren with her unwavering work ethic, and her deep faith. "Rest causes rust" were her mother's words and Evelyn lived by those words. No matter the task, she took it on with . Evelyn was an inspiration to her large family, and to all who had the pleasure of knowing her. Evelyn was a member of St. Aloysius Catholic Church, the Altar and Rosary Society, Cabrillo Club and the Luso American Society. Evelyn was preceded in death by her parents, Henry and Della Gomes; her beloved husband, Tony; her grandson Robert Correia, her son-in-law Jeff Benevedes, her brother, Arnold Gomes; her sisters, Alice Rose and Eldora Foster Hale. Evelyn will be lovingly remembered by her children, sons, Gilbert (Carolyn), Eugene (Patricia), Anthony (Dian), Gerald (Sherri) and daughters, Janice Saltzman (Mike), Mary Correia (Marvin), and Annette Benevedes Cox (Doug); her grandchildren, Erica Ruiz (Frank), Brian Nunes (Krystle), Devin Nunes (Elizabeth), Toni Pinkerton (Robert),Julie Silva (Joe); Gene Nunes, Trisha Whitfield (Deon), Jennifer Mouser (Scott), Kari Pinheiro (David), Chris Correia (Michelle), Kelli Medeiros (Justin), Anthony Nunes (Lori), Joseph Benevedes (Jennifer), Michael Saltzman (Jessica), Phillip Correia (Crystal), Jonathan Benevedes (LeighAnn), Mark Nunes (Elizabeth), Sarah Sparks (Rob), JJ Nunes (Danielle), Richard Nunes (Kaylee), Tyson Nunes; her fifty great-grandchildren; many nieces, nephews, and godchildren; and her loving caregivers, Yureni Salcedo, Mary Angeles, and Raquel Bento. Services will be held on Friday, July 2nd at St. Aloysius Catholic Church, 125 East Pleasant Avenue, Tulare. The Recitation of the Rosary will take place at 9:30 a.m. followed by the Mass of the Resurrection at 10:00. Burial will be at Tulare District Cemetery. In lieu of flowers, the family requests that a donation be made to your charity of choice.

Evelyn Della Nunes passed away peacefully on June 24, 2021, at the age of 101 years old. She was born on January 8, 1920, in Lemoore, California, to Henry and Della Gomes. Evelyn was the second of four children. She graduated from Hanford High... View Obituary & Service Information

The family of Evelyn Della Nunes created this Life Tributes page to make it easy to share your memories.

Send flowers to the Nunes family.