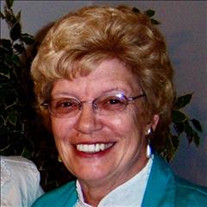 Obituary Re: Evelyn Darlene Hancock Darlene Hancock passed away on August 9, 2021 after a short battle with cancer at the age of 77. She was born on December 14, 1943, in Monterey Park, CA. She grew up in Rosemead, CA, and attended Rosemead High School. While in high school, she met the love of her life, Dick Hancock, and the two of them were married in May, 1964. In her early years, Darlene worked as a waitress at Bob's Big Boy and later took on the role of motherhood with the birth of her son, Craig in 1966, followed by the birth of her daughter, Wendy, in 1969. Darlene also worked as an Avon Lady through 1976, until their move to Montgomery Pass, Nevada. There, she and her husband owned and operated a motel. In 1986, they moved to Bishop, CA. There, Darlene, became involved with the Women's Auxiliary of the VFW, eventually serving as president. While in Bishop, Darlene ran a dress shop, worked in medical billing and was a teller at the local bank. In 2006, Dick and Darlene moved to the Visalia to be closer to their children and grandchildren. After Dick's death in 2011, Darlene moved to Tulare and volunteered at a local thrift store and helped in her son's office. Darlene loved crafting, antiquing, fishing, playing Bunco with friends, helping at church, cheering on her Dodgers, and above all, spending time with her family. She adored her four granddaughters and her seven great-grandchildren. Darlene is survived by her son, Craig (Rosemary) Hancock, her daughter, Wendy Cahill, her four granddaughters, Tiffani Gravito, Stacie Gravito, Briana (Justin) Ritchie and Heather (Charlie) Miller. Her great grandchildren, Mya Madriz, Mila and Elijah Ledbetter, Samuel, Kate, Warner and Maren Ritchie. She is also survived by her stepmother, Madge Cutler, her sisters, Diana Dunbar, Teka Twilling, her brother, Roy Potter, her sister-in-law, Mary Hancock, and many nephews, nieces and extended family. The Visitation and Funeral service with both be held at Salser and Dillard Funeral Chapel, 127 E. Caldwell, Visalia. Visitation will be on Sunday, August 1 5th from 4:00 pm to 7:00 pm and the funeral service will be on Monday, August 16th at 12:00 pm. Burial will follow at the Visalia District Cemetery, 1300 W. Goshen Avenue, Visalia.

Obituary Re: Evelyn Darlene Hancock Darlene Hancock passed away on August 9, 2021 after a short battle with cancer at the age of 77. She was born on December 14, 1943, in Monterey Park, CA. She grew up in Rosemead, CA, and attended Rosemead... View Obituary & Service Information

The family of Evelyn Darlene Hancock created this Life Tributes page to make it easy to share your memories.

Send flowers to the Hancock family.