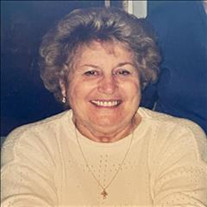 Eva M. Soares Wife, Mother, Sister, Grandmother & Friend to all Eva Mendonca Soares passed peacefully, of natural causes, surrounded by family on October 1, 2021, at the age of 90. Born in Visalia to Manuel I. and Isabel (Mattos) Mendonca, she was the 4th of nine children. The family lived on what they called the Jim Rivers Ranch in north Visalia and the children attended Willow School. In 1946, the family moved to the Oakmore/Oakdale Ranch, and she attended Visalia Union High School, graduating in 1949. On December 10, 1950, Eva became Mrs. Tony H. Soares. They had four children. They owned and operated a dairy farm until 1974, then sold the dairy to go into walnut farming. Along with their sons, they started Soares Walnut Farming and Harvesting. Eva always had lots of flowers in her yard and in her younger years, found mowing her lawn therapeutic, because she could pretend not to hear her children calling her. She and Tony always kept a big garden, where she enjoyed bird watching and feeding her hummingbirds. Eva also became quite the seamstress, making clothes for her daughters for school and parades. The family was involved with the PPAV Hall and Portuguese celebrations. Eva finally got her driver's license at the age of 36 so that she could take the kids to catechism, band, 4-H, and FFA meetings. Eva and Tony started RVing and traveling with family and friends in the 1970s. They would plan trips cross country with Eva serving as navigator. This was quite funny because she was directionally challenged, but they never got lost! Eva was involved with the Goshen Mounted Police and would volunteer her time toward fundraising for their causes. She also volunteered for many years in the crown room for the Portuguese celebrations in Visalia and Cayucos. Tony and Eva loved family and friends. Until recently, Monday night was known in the Soares house as family night since 1972. That brought the kids home and kept them close. Eva took her kids and grandkids on bike rides, jumping in cotton trailers, and long walks. She also was an enthusiastic spectator for her children and grandchildren at parades, sporting events, and band events. She was known for her homemade ice cream and never said no to a root beer float. She often hosted her grandchildren overnight, and would tuck them all into bed, read Little Golden Books and Dr. Seuss (her favorite being Green Eggs and Ham), and then lead the ones who were still awake in a prayer of the rosary. Many of her grandchildren fondly remember her wonderful, soft reading voice. In an effort to spend more time with the family, after the passing of her husband, she would gift the family a weekend at a cabin in Shaver Lake each year. She loved sitting in front of the fire with a cup of coffee, playing card games, and watching her children, grandchildren, and great grandchildren play in the snow. Eva was preceded in death by her husband, Tony H. Soares; son, Tony H. Soares Jr.; daughter, Marian (Cookie) Tollison; son-in-law John Williams; parents, Manuel I. and Isabel Mendonca; brothers, Joe Mendonca, John Mendonca (Nadine), and Tony Mendonca (Nadine); sister Mary Alves (Bill); and sister-in-law Irene Mendonca; brothers-in law Manuel Soares (Antoinette), Joe Soares, John Perry, and Louis Soares. She is survived by daughter Jeannie Williams; son Eddie Soares (Sheri); son-in-law John Tollison; grandchildren Eddie Irwin (Tina Silva), Mike Irwin, Tony Soares III (April), Danielle Mohamed (Sam), Ashley Soares (Charles Burrell), Janeva Tollison-Spratt (Ryan), Marlee VanSurksum (Ryan), Tamara Tollison (Steven Baird), Jennifer McKinzie (Austin), Lauren Wilsey (David), and great grandchildren Abraham and Isha Mohammad, Scarlet and Sage Soares, Atticus Narvaez, Charles Wilsey, and Quinn McKinzie; brothers Manuel Mendonca, George Mendonca (Carol), Carl Mendonca (Rosemary), and Edward Mendonca; and sisters-in-law Mary Perry and Virginia Soares. The Holy Rosary will be Wednesday, October 20 at 5:00 PM at Salser and Dillard Funeral Chapel, 127 E. Caldwell Ave., Visalia, CA 93277. Funeral Mass will be on Thursday, October 21 at 10:30 AM at St. Mary's Church in Visalia, followed by graveside services at Visalia District Cemetery. The family would like to thank Lori, Jessica, and Rebecca from American Care Hospice, and Rochelle, Becki and the wonderful staff at Silver House for their loving care. Services have been entrusted to Salser & Dillard Funeral Chapel. Memorial Tributes and condolences may be offered by logging onto www.salseranddillard.com.

The family of Eva Soares created this Life Tributes page to make it easy to share your memories.

Send flowers to the Soares family.