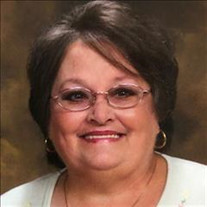 Elma LaVonne Dodson (nee Hilton) Age 64 Place of Residence: Tulare, CA Passed April 13, 2021, at Kaweah Delta Hospital, Visalia, CA Elma was born on August 12th, 1956, along with her twin brother, in Nyssa, Oregon to Elmer Hilton, and Mary Buchanan. While still a small child, the family relocated to California, eventually settling in Visalia. She attended Redwood High School. She was introduced to Larry Vearl Dodson on Halloween of 1976 and the two married on June 11th 1977. She always finished telling the story of their meeting with, "Larry got the treat, I got tricked!" They welcomed their first child, a son, Eric Dodson, in June of 1980. Two years later, a daughter, April Dodson, was born in September of 1982. They raised their family in Tulare. On January 23rd, 2002 her daughter, April, married Ronald Wesley Mathis, of Beale Air Force Base, Marysville, CA. In September of 2002 her first grandson was born, Nathan Wesley Mathis, and five years later, a second grandson, Jacob Daniel Mathis, was born in August of 2007. On March 16th, 2013 her son, Eric, married Jennifer Murphy, of Visalia, CA. In September of 2017, her first grand daughter, Lillian Patricia Dodson was born. She waitressed for over 20 years and was great at it. She knew all her customers by name and enjoyed getting to know each one, she never met a stranger. She enjoyed playing bingo, cards, and games and was often found visiting with friends and family. Her favorite role in life was being a Nana. She loved spending time with her kids and grandkids and could always be found bragging about her babies. Her grandchildren were her pride and joy . Elma is preceded in death by her father, Elmer Hilton, Mother, Mary Buchanan, brothers Denis and Elmer "Bo" Hilton. She is survived by her husband Larry Dodson, their two children and three grandchildren, sister Debbie Vanderbilt and brother Carl Hilton. A viewing will be held on April 30th, 2021 from 8-10am at Salser & Dillard Funeral Chapel, 127 E. Caldwell Ave, Visalia, CA 93277. Proceeded by an 11:30am Graveside service at North Tulare Cemetery, at 4572 J Street, Tulare, CA 93274. Reception to follow. Services have been entrusted to Salser & Dillard Funeral Chapel. Memorial Tributes and condolences may be offered by logging onto www.salseranddillard.com.

The family of Elma LaVonne Dodson created this Life Tributes page to make it easy to share your memories.

Send flowers to the Dodson family.