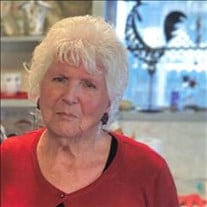 Elice Frances Lowe 81, of Visalia California passed away in the comfort of her home on November 25th 2021. Elice was born on March 28th 1940 in the State of Missouri. Elice Frances McCluskey grew up in Missouri while being raised by her Aunt, Effie McCluskey. While attending High School Elice caught the eye of a young man who would later become the love of her life. The day after she graduated from High School April 19th 1958 Elice married Jerry Wayne Lowe and that was the beginning of a long and happy flourishing life. In 1962 Elice and Jerry moved to California where Jerry prospered as a mechanic and Elice raised their three children. During this time Elice attended classes and specialized training to become a Special Needs Teachers Aid, Her caring and fostering nature inspired her to become a foster parent for children of all ages and special needs. Elice and Jerry were one of the first foster parents to take in an entire family to keep them together. Elice also had a passion for anfiques or anything old and unique later becoming an Antique Dealer. And anyone who knew Elice was aware ofher love for chicken decor. Elice is survived by her two daughters, Sharon Lowe and Missy Wilder, seven grandchildren, David Lowe, Michael Lowe, Alan Lowe, Danielle Ward, Matthew Dungan, Hannah Dungan, Hailey Dungan, and eighteen Great Grandchildren. She is survived by one sister, Sue Leach, two brothers, Vern Jr. and Carroll Henson. Also from an extended family three brothers, Eugene McCluskey, James McCluskey and Michael McCluskey. Elice is preceded in death by her parents, her husband Jerry Lowe, her son Randy Lowe, three sisters, Loretta Money, Louise Mobley, Melba Mixen and extended family Raymond McCluskey, Vernon McCluskey, Donnie McCluskey and Dale McCluskey. Elice was known for her delicious home cooked meals and a warm smile. She loved going to yard sales and the casino where her luck shined. But her greatest joy was her grandkids spending time with them anyway she could. Elice Frances Lowe A truly amazing mom, one of a kind. She had a generous heart and gave her love and Idndness without hesitation. Elice was cherished by all that knew her and will be missed. A Celebration of Life will be held on December 19th from 1 to 4pm at the Wyndham Hotel (Redwood Room) located at 9000 West Airport Drive, Visalia Ca. Family and Friends are welcomed to attend.

Elice Frances Lowe 81, of Visalia California passed away in the comfort of her home on November 25th 2021. Elice was born on March 28th 1940 in the State of Missouri. Elice Frances McCluskey grew up in Missouri while being raised by her Aunt,... View Obituary & Service Information

The family of Elice Frances Lowe created this Life Tributes page to make it easy to share your memories.

Elice Frances Lowe 81, of Visalia California passed away in the...

Send flowers to the Lowe family.