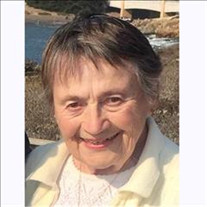 Obituary for Eleanor Ann Woodard Eleanor Ann Woodard (Ellie to friends and family) of Cambria, CA, passed peacefully on March 27, 2021 in Visalia, CA at the age of 84. Ellie was born to Paul and Alma Madden on August 1, 1936 in San Francisco, CA. She was an only child. The family moved to San Mateo, CA where she attended St. Matthews Elementary School and Mercy High School. She made many lifelong friends at Mercy and loved planning the reunions for many years. Growing up she visited extended family in San Francisco often and always told of the good times that she had with her aunts, uncles, and cousins. Soon after graduating from high school she met the love of her life, Donald Woodard. They were married in 1956. They established a home in South San Francisco for a few short years and then moved to Belmont, CA where they lived for 40 years. Together they raised four children: Sheila Rast (John), Peter Woodard (Dianna), John Woodard (Christine) and Doc Woodard (Diana). Ellie had many fond memories of watching her kids play sports, taking family camping vacations, and spending time with friends and family. She loved to organize family reunions usually centered around her aunt, Sr. Leonella's visits. Upon retirement, Don and Ellie moved to Cambria, CA. They both loved living "by the sea" and made many friendships in this beautiful community. Ellie and Don were actively involved and loved being a part of the Santa Rosa Catholic Church community. Ellie was a docent at Hearst Castle and became interested in learning the history of the Castle and the people. She also enjoyed meeting new people. Ellie was an avid bridge player and belonged to bridge groups both in Belmont, CA and Cambria, CA. She was artistic and looked at the world around her with an artist's perspective. She was a gifted writer and created "memory books" filled with family history, family stories, travel stories, favorite articles, poems, quotations, and personal narratives. The memory books are treasured by her family. Ellie and Don traveled to Ireland, Germany, and Norway for the family history, but also traveled to Alaska, Panama Canal, and throughout the United States during their long marriage. She would always say "I am so blessed" when thinking of her family. The entire family was blessed to have such a beautiful mother, grandmother, and great-grandmother in their lives. She was preceded in death by her much-loved husband, Don and son, John. She is survived by daughter Sheila (John) grandchildren Megan (Richard), Monica, and Jack (Nicole) and great-grandchildren Fallon, Hailey, Madelyn, Patrick, Johnny, and Samantha. Son Peter (Dianna), grandchildren Lauren (David) and Kelly (Logan), and great-grandchildren Rylan, Vivienne, and Leighton. Daughter-in-law Chris, grandchildren Keri and Jake. Son Doc (Diana), grandchildren Nick, Nicolette, and Noah. A special thank you to her caregivers at Quail Park, Memory Care in Visalia, her neighbors, and friends in Cambria.

Obituary for Eleanor Ann Woodard Eleanor Ann Woodard (Ellie to friends and family) of Cambria, CA, passed peacefully on March 27, 2021 in Visalia, CA at the age of 84. Ellie was born to Paul and Alma Madden on August 1, 1936 in San Francisco,... View Obituary & Service Information

The family of Eleanor Ann Woodard created this Life Tributes page to make it easy to share your memories.

Send flowers to the Woodard family.