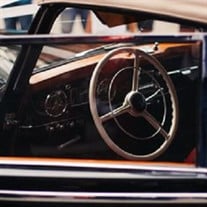 It is with great sadness that the family of Edward B Alberti, 75, announce his passing on Thursday, December 16, 2021, surrounded by family. Eddie will be lovingly missed by his wife of nearly 55 years, Georgia Alberti, three sons Eddie Alberti Jr. (Lynette), Todd Alberti (Jackie), and Chad Alberti. He was survived by seven grand-children Tori Alberti, Amy Alberti, Abby Alberti, Benjamin Alberti, Sadie Alberti, Jacob Fox (Alex), and Courtnie Fox Junio (Ethan). Two great-grands Parker and Addison, and baby Hudson due January 3rd. Eddie is survived by two sisters, Margaret Bandy and Franci Steelman (James). Eddie was second born to Bennie and Florence Alberti who preceded him in death, along with one brother Leo Alberti, and one cousin Anthony Alberti Jr. Eddie attended Palo Verde School and Tulare Union High School (�64). He was a proud veteran who honorably served in the United States Army, serving one tour in Vietnam. He married his high school sweetheart and soon started his family. Eddie was a very hard worker, working first on the family farm alongside his dad and later became a sub-contractor for a dairy silage operation for 43 years. He always gave the dairymen his best effort. Eddie enjoyed motorcycle racing and when the boys were ready, got them into racing as well. It was definitely a family affair. The racing progressed from motorcycles to Odysseys, to micro-sprints. He enjoyed watching many friends in midgets and sprint cars. His favorite driver in open wheel racing was Kyle Larson. Some of Eddie's fondest memories were spending weekends at Pine Flat Lake, house-boating with our best friends John and Debbie Saltzman. He was always ready for a lake cruise, card games, movies, and barbecuing. Eddie was an avid gardener and grew succulents and enjoyed raising his beautiful doves. In his later years, he was lucky to find an old hot rod to restore. It took him 5 years to complete, with the help of his brother-in-laws, Don and Charles. The car was a 1938 Ford Coupe, inferno red, what a ride! Eddie and Georgia joined Tulare's Small Town Cruisers Car Club, where they were immediately treated like family and gained a large number of new �car club' friends. He shared many wonderful memories with this group, partaking in cruise nights, car shows, and card games with the closest friends. He also restored a 1969 Camaro, still in the family. Eddie enjoyed attending football games and the races with friends. His favorite pastime was spending time with his family, especially his loving grandchildren. He loved to tease them and loved it when they teased him back. He enjoyed attending their sporting events and could always beat them at a game of cards. Eddie's faithful companion was his dog, Willie, a faithful and loving guard dog. During Eddie's lengthy illness, Willie kept watch over him until the end, never leaving his side. The family would like to extend their sincere appreciation for all the love and support during our time of loss. Thank you to Salser and Dillard Funeral Chapel for treating him with dignity as a proud man and Veteran. A special thank you to Bristol Hospice workers who treated him with the utmost dignity and compassion during his last days. A Celebration of Life Service will be held Sunday, March 6, 2022 at 1:00pm at the Porterville Veterans Memorial Building 1900 W. Olive Avenue Porterville, CA 93257.

It is with great sadness that the family of Edward B Alberti, 75, announce his passing on Thursday, December 16, 2021, surrounded by family. Eddie will be lovingly missed by his wife of nearly 55 years, Georgia Alberti, three sons Eddie Alberti... View Obituary & Service Information

The family of Edward Bennie Alberti created this Life Tributes page to make it easy to share your memories.

It is with great sadness that the family of Edward B Alberti,...