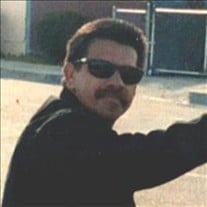 Edward "Fast Eddie" Aguirre Edward Aguirre, 59, of Lemon Cove, CA jumped on his Harley and took his last ride to rest with his late wife, Etta Aguirre, on Wednesday, March 24, 2021, in Visalia, CA. Eddie was born to the late Fernando and Ruth Aguirre on February 27, 1962, in Visalia, CA. He began working at just the age of 7 in the fields picking grapes and harvesting walnuts to help provide for the family. At the young age of 10, he had attended the Visalia Sportsman Association learning gun safety rules and regulations. At 14 he worked for the late Arson Iskendarian of Ivanhoe as a ranch hand alongside his father. At the age of 17, he began working for Real Alternative Youth Organization (RAYO) helping the community youth who were struggling with life, while attending COS. He was truly a jack of all trades and managed his own landscaping business. Every day was an adventure from childhood to adulthood. He was a no-hit pitcher as a child, able to improvise to build, make or fix anything from motorcycles to cars. His passion for motorcycles began at a very young age and loved the thrill of the ride. In 1984, he was gifted his first Harley Davidson. From daily commuting to weekend excursions the rumble of his bike would let you know when he was near. In the 90's he became a member of the Mongols Motorcycle Club. While in the club he banded together with his brothers and rode many adventures. Family was everything, from being a Brother, a Dad, a Nino, and a Grandpa, every moment was memorable. His teaching of life skills from how to do an oil change, how to make a proper fire would stick with everyone for life. His attitude, his laugh, and his tough love molded all who he came in contact with to be the best they could be. "Don't be lame." He is the fierce brother of the late Danny Madrid, Priscilla Lopez, the late Patty Garcia, Lupita Moreno, the late Tommy Madrid, Veronica Soto, Terry Diaz, Tudy Aguirre, and the late Anthony Aguirre. He is survived by his children: Edward Aguirre Jr., Andrew Aguirre, Adrienne Aguirre-Lopez, Stephanie Aguirre Mejia, Frankie Aguirre; Stepsons Christopher Mason, Daniel Espirito, and acclaimed son Kris Buerger. Edward is also survived by his many grandchildren, great-grandchildren, godchildren, and many, many nieces and nephews. Viewing and Rosary will be held at Salser & Dillard from 4:00-7:00 pm on April 29, 2021. Mass will be held at St. Mary's on April 30, 2021 at 8:30 a.m. followed by Burial Service at Exeter Cemetery. Services have been entrusted to Salser & Dillard Funeral Chapel. Memorial Tributes and condolences may be offered by logging onto www.salseranddillard.com.

Edward "Fast Eddie" Aguirre Edward Aguirre, 59, of Lemon Cove, CA jumped on his Harley and took his last ride to rest with his late wife, Etta Aguirre, on Wednesday, March 24, 2021, in Visalia, CA. Eddie was born to the late Fernando and Ruth... View Obituary & Service Information

The family of Fast Eddie created this Life Tributes page to make it easy to share your memories.