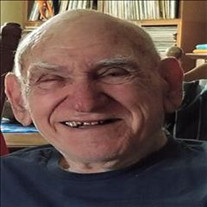 Douglas Edward Chavez, age 86, was called to his heavenly home December 17, 2021 in Dayton, Oregon. He was born in Bakersfield, California on September 12, 1935 to Charles Eusebio Chavez and Dollie Bessie (Cox) Chavez, the unexpected twin brother to Charles Edwin. Doug graduated from Bakersfield High School in 1953 and met his wife Doris Myers while working at Woolworth together. They were married in 1956, sharing 52 years together until her death in 2008. Along the way they welcomed 4 children. The family moved to Ivanhoe, California in 1973 where Doug worked as a store clerk and enjoyed growing fruits, vegetables, and flowers. He was famous for his jellies and accidentally created his best loved flavor, Pear Cherry. With the children on their own, Doug and Doris moved to Visalia where he continued his gardening and canning. In 2015 Doug married Betty Myers and moved to Dayton, Oregon. There he made many friends, enjoying the mild summers and fresh air. Doug was predeceased by his parents, wife Doris, twin brother Charles Edwin Chavez, brother Robert Eugene Chavez, sister Mary Jane Chavez, brother in law Verner Graves, daughter in law Colleen Chavez and son in law Eric Skiff. He is survived by his wife Betty Chavez, children Darrel (Leesa) Chavez of Fresno, Darla (David) Young of Visalia, Donna (Robert) Smart of Visalia, and Dena (Karl) Orrebrand of Porterville as well as his nieces and nephews turned bonus children Roxanne (Ed) Burger of Fairbanks, Alaska, Victor (Jennifer) Myers of Dallas, Texas, and Jordan (Gretchen) Myers of Bowling Green, Kentucky. He was a proud Papa to 14 grandchildren and 8 great grandchildren. He is also survived by his brother Donald Eusebio Chavez of Athens, Georgia, sister in law Alma Chavez of Portland, Oregon, and sisters Eller Mae (Emmett) Klauburg of Mesa, Arizona and Virginia Lorene Graves of Bakersfield, California. In addition he leaves many nieces, nephews, and friends to cherish his memory. Visitation will be Thursday January 13 from 4 -6 at Salser and Dillard, Visalia, California. A graveside service will be held at Visalia District Cemetery on Friday January 14 at 9am with a Celebration of Life to follow at 11am at Visalia Community Church of Christ. Services have been entrusted to Salser & Dillard Funeral Chapel. Memorial Tributes and condolences may be offered by logging onto www.salseranddillard.com.

The family of Douglas Chavez created this Life Tributes page to make it easy to share your memories.

Douglas Edward Chavez, age 86, was called to his heavenly home...

Send flowers to the Chavez family.