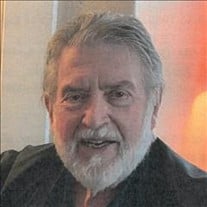 Donald Cecil Denny Jr, 83, of Visalia California died Saturday morning at his home. Donald (Don) was the son of Donald Cecil Denny Sr and Lilletta Sylvia Denny (nee Baker) and was born in San Francisco California. Don, his two younger brothers Lowell and Leland and their parents lived in Berkeley, Oakland and Hayward. Don was preceded in death by his parents and siblings. Don served in the United States Navy (active and reserve duty) from December 1955 to January 1959, with one year and four months served at sea on the USS Bennington. At the time of his discharge, Don was an Airman. Don worked for the General Motors (GM) Assembly Division Fremont Plant for 24 years. Don was a long time member of the American Budgerigar Society (ABS), he was just 10 years old when he got his first bird, which led to a lifelong hobby of raising, breeding, showing and judging these birds throughout North America (United States and Canada) and in Rio de Janeiro, Brazil. He also served as a Chairman of the Judges Panel. Don and his Broken Wing Aviary were well known throughout the ABS. Don was married to Alice Faye Davis on July 18,1957 and they had six children, Tim, Marvin, Marlene, Carol, Cheryl and Deanna. The family lived in Fremont and also spent time visiting a cabin in Forresta, which was passed down to Don by his mother upon her death. Following a divorce, Don moved to Modesto and then to Visalia. Don married Linda Kay Keister in 1995 and made their home together in Visalia. Following his retirement from GM, Don worked as a coach for different schools and associations in Fremont, Visalia, Tulare, Farmersville and Woodlake, coaching baseball, softball and volleyball. He also sold Kirby vacuums, bred/sold prized Budgerigars and worked as a Judge at ABS bird shows. Don is survived by his wife of 26 years , Linda Kay Denny, 80, of Visalia, his six children, 13 grandchildren and six great grandchildren. On Monday, May 16, 2022, a viewing will be held at the Salser and Dillard Funeral Home in Visalia from 11 AM to 1 PM followed by a graveside service at the Visalia Public Cemetery at 2 PM. Services have been entrusted to Salser & Dillard Funeral Chapel. Memorial Tributes and condolences may be offered by logging onto www.salseranddillard.com.

The family of Donald Cecil Denny created this Life Tributes page to make it easy to share your memories.

Send flowers to the Denny family.